Futures Amid the Flames

One of the features of living in southern California is the periodic spectacle of wildfires that darken our skies with smoke and threaten our towns and neighborhoods with conflagration. The latest, which started last week in the Angeles National Forest in the mountains to the northeast of LA, has made national news for its size and continued growth more than for its destruction, a couple dozen structures so far, though it still poses an urgent threat to, among other things in its path, the famed Mt. Wilson Observatory.

The fire is relevant to this blog because it’s burning in exactly the range of mountains you see in the panoramic photo shown at the top of this page, about 20 miles to the east-northeast of my house. On Saturday night, and again last night, the range was dotted with orange specs, and some larger flares of obvious flames that must have been enormous to be so visible at that distance, throughout the night.

Against that backdrop Yeong and I drove into Hollywood Saturday evening to attend this year’s Writers and Illustrators of the Future Awards ceremony, their 25th annual awards, and so staged with somewhat more pomp that past ceremonies I’ve attended. This year it was at the Hollywood Roosevelt Hotel, just down the street from Graumann’s Chinese Theater and the new Kodak Theater where the Oscar Awards are now staged each year — in fact, this year’s WotF ceremony was held in the very room where the *first* Oscar Awards were handed out in 1929…

The Writers/Illustrators of the Future Awards ceremonies are always somewhat surrealistic, compared to typical science fiction/fantasy presentations such as the Hugo or World Fantasy Awards, partly because they are staged to Hollywood standards of glitz and glamor and (at least comparatively) professionalism. The dress code is formal (though this detail had been absent from my e-mail invitation), video and photo crews record the event and broadcast it on the web, and the hosts and presenters maintain confidant, ever-smiling game-show-emcee stage presences. The ceremony runs like clockwork, the awards recipients and presenters standing in such similar poses for their photographs, and the winners so consistently thanking L. Ron Hubbard and/or the Writers/Illustrators of the Future contest itself, that one assumes fairly extensive rehearsals, or even coaching.

But the surrealism also comes from the glowing photo of L. Ron Hubbard that gazes down from one corner of the room, and the capsule video history of the great man that begins the evening. There were two special presenters on this year’s program, a Dr. Harry Kloor, who introduced a clip from a forthcoming animated “educational sci-fi adventure” film called Quantum Quest, and one Don Hartsell, commissioner and managing director of the World Sky Race, who described this grandiose around-the-world competition of airships that’s scheduled to take place in 2011. It wasn’t obvious how either of these topics related to the evening’s awards (though the same might be said for more than a couple Nebula Awards guest speakers), other than they sustained the spirit of self-promotion and self-congratulation begun earlier with the flurry of commendations and citations about the contest from various government, publishing, and educational bodies in that video history, and in the host’s introduction, among special guests attending the event, of numerous Hollywood film and TV actors — none of whom I’d ever heard of, but then I don’t keep up on that industry — as if to specially validate the significance of the evening’s events.

The elephant in the room of course was the Church of Scientology, but to give the contest due credit, the organizers of the awards ceremony and the week-long workshop that precedes it are reportedly scrupulous about keeping church influence out of the business of running these contests. Certainly the prominent writers and judges who participate in these contests year after year – Tim Powers, Kevin J. Anderson, Jerry Pournelle, Rob Sawyer, and many others — do so in genuine support of new talent, in the “pay forward” spirit of our genres, apparently without concern that the contest seems to endorse the Church in any way; this separation surely goes back to the origins of the contest, when Algis Budrys, one of the original judges (and editor of the anthologies), got so many other prominent writers involved. (At the same time, water was the only beverage available at the post-awards reception, and even the dinners arranged for the contest judges and special guests provided only water and coffee. And it’s easy to speculate about why those particular film/TV actors happened to be present at this event.)

As for the awards — they included the presentation of trophies to all 24 of the writer and illustrator quarterly winners and finalists, each pair announced by a pair of judges or special guests, though none of them were surprises since quarterly results had already been announced throughout the past year. The culmination of the evening were the two grand prizes, which *were* surprises: they were Emery Huang (a Florida native of Chinese ancestry) for the Writers of the Future contest and Oleksandra Barysheva (a native of Ukraine now living in New Jersey) for the Illustrators of the Future.

As the ceremony ended Yeong and I lingered as official photos were taken, picked up free copies of the new L. Ron Hubbard Presents Writers of the Future anthology, and then joined Amelia Beamer and Gary K. Wolfe, who had been at the event since Friday afternoon to cover the event for Locus and talk with the students. We retired to the hotel bar for real drinks and chatted about the evening. Amelia’s photos, and a formal write-up of the awards ceremony, will appear in Locus Magazine.

– Later, 9p.m.: here’s an image from tonight’s view of the fire, about the best I can do given my limited skill and equipment… Click for larger view. 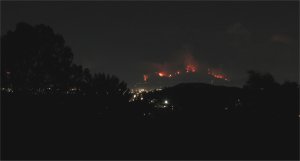 This entry was posted in Uncategorized. Bookmark the permalink.

One Response to Futures Amid the Flames