James Morrow, THE MADONNA AND THE STARSHIP 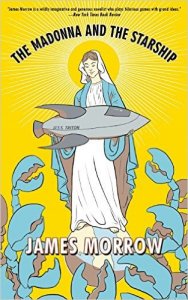 James Morrow’s short novel The Madonna and the Starship is one of a handful of short novels or long novellas released by San Francisco-based Tachyon Publications in the past couple years, others including two Nancy Kress titles that both won the Nebula and Locus Awards: After the Fall, Before the Fall, During the Fall and Yesterday’s Kin.

The book is a satirical, almost farcical, novel about 1950s TV, alien contact, and science vs. religion.

The narrator, Kurt Jastrow, is the lead writer of a ’50s live TV show called Brock Barton and His Rocket Rangers, whose each episode ends with a science lesson set in “Uncle Wonder’s Attic”, where Uncle Wonder is played by Jastrow himself. One day his TV monitor on that set is interrupted by an image of lobster-like creatures who announce that they, the Qualimosons, having monitored several TV transmissions from Earth, have decided to give him, Kurt Jastrow, their Zorningorg Prize, given to those who “champion reason”. They show up in person on Friday’s show, to present him with a crystalline trophy.

But then the Qualimosons chance upon the rehearsal of a religious show, Not by Bread Alone, written by Jastrow’s associate (and potential girlfriend) Connie Osborne, and, alarmed by the apparent existence of irrational people on planet Earth, offer to exterminate them.

Kurt and Connie are alarmed by that word. The aliens counter: how about “annihilate” or “massacre”? (p62)

The subsequent plot involves Kurt Jastrow amd Connie Osborne in a scramble to re-write the script within some 40 hours to convince the alien Qualimosons that Earth is not a cesspit of religious superstition. They succeed, of course, (by creating an alternate script for Sunday’s show, with the book’s title, that strives to find a middle-ground between the numinous and the nihilist), but with ironic consequences.

Some citations. On p6, KJ’s uncle describes his pulp magazine collection: “The church of cosmic astonishment, Kurt. It’s the only religion you’ll ever need”

Here’s a typical example of the book’s arch dialogue, a passage in a taxi between the aliens and Connie, as Kurt and Connie are still trying to pretend to the aliens that Earth is entirely rational (p72-73):

“As I told your audience this afternoon, Qualimosa is in the throes of a civil war,” said Wulawand. “The first shots were fired two hundred years ago, after a clever young scientist, Professor Squatront, advanced a persuasive theory concerning the origin of our planet’s premiere species – and all its other life-forms as well.”

“Squatront argued that we could account for ourselves entirely through materialist evolutionary processes,” said Volavont. “Narratives of special creation by a Supreme Being were tales for children.”

“I’m thankful that no such controversy ever emerged here on Earth,” said Connie.

“You don’t know how lucky you are,” said Wulawand.

And this parody of S-fnal assumptions, p110, in which *of course* the aliens understand poker.

“The rules are so logical and self-evident that the game has evolved independently on many worlds, as did chess and mahjong,” said Volavont. “Seven-card stud, I daresay, is a universal constant, rather like electron mass and the speed of light.”

Another note: Saul Silver, the claustrophobic editor of SF mag Andromeda, for whom Kurt writes, who never leaves his apartment [I think this is based on a real 1950s editor, HL Gold? Not sure.], a couple times answers the phone with sarcastic phrases, e.g. “Planet Mongo, Ming the Merciless speaking.” (p165b).

This is funny because *my father* did this sort of thing when I was a kid, at least in jest; he would say “Kelly’s Pool Hall, Eight Ball Speaking.” I didn’t remember that until reading this book.

This entry was posted in Book Notes, Religion, science fiction. Bookmark the permalink.