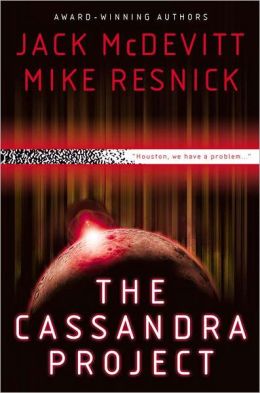 Jack McDevitt and Mike Resnick’s The Cassandra Project (2012) is set in 2019 at a time when NASA funding is being cut and many worry that NASA may be disbanded altogether.

It begins with a routine release of old records from the 1960s that includes voice recordings from an early Apollo mission in which a LEM pilot is heard saying “approaching launch point” and Houston replying “go for launch”. Reporters pounce — does this mean someone landed on the moon before Apollo 11?

The central character is Jerry Culpepper, NASA public affairs director, who’s caught unprepared for this sudden controversy. Worse, circumstantial evidence keeps mounting to support the idea of an earlier landing [it’s clever how the authors deftly avoid naming by number those earlier missions; they never say Apollo 9 or Apollo 10], even as officials, all the way to the president, dismiss the idea.

The narrative resembles that of recent McDevitt novels, in which a central character travels around interviewing various potential witnesses, and slowly assembles pieces of a solution to the mystery. (I’m not as familiar with recent Resnick novels.) A framing theme is the debate about whether government or private industry is best suited to run a space program; this is dramatized by the involvement of a billionaire, Morgan Blackstone, whose private company has plans to return to the moon within a year, and who gets a lot of publicity challenging the government’s brushoff of this controversy.

Further developments include, of all things, an explanation for the ‘real’ reason for the Watergate Hotel break-in.

It’s no surprise, given this setup, that the resolution does involve what was suspected from the beginning. The real reveal is the reason for those early landings…

This is good, decent, bread and butter science fiction, with a provocative mystery though a fairly familiar payoff.

Now, in some of my reviews on this blog, I’m going to include my own notes about how the book ends — spoiler alerts!! — provided behind a javascript show/hide link. I document these for my own use — to remind myself, 5 or 10 years hence, how something I read turned out. In the context of this blog, I’m providing these for any readers who doubt they’ll ever read the book but are nevertheless curious about what the payoff might be. As well as, perhaps, readers who *have* read the book and want to see if we understood that payoff in the same way.

In the final chapters, the billionaire’s mission to the Moon discovers an alien structure on the back side, and subsequently not one but two alien messages on tablets are discovered among archives on Earth.

The backstory established in the final pages is this: Aliens visited earth around 1st century AD, and sent an ambassador to the surface, who was killed without provocation; they left a bitter message to this effect on the back side of the moon, and departed.

When early ’60s photos of the lunar backside showed a structure there, the photos were suppressed, and two secret Apollo missions (before Apollo 11) were directed to land there, the first of which discovered the message, the second of which was then directed to destroy it. Once that message was discovered, authorities on Earth — all the way up Nixon — created a second, phony message, about how no civilization has ever survived the advance of technology, as a decoy, in case the destroyed base was ever discovered. [The first message would too easily be interpreted as being about Jesus — a point the authors only imply, but do not spell out — and therefore too potentially disruptive of cultural peace worldwide.]

In the book’s narrative in 2019, evidence emerges of those missions, and after much digging both messages are discovered by our clever protagonists. At the end, both the president and a billionaire rival agree to suppress the first, true message, and reveal only the phony message — and to therefore justify the further, careful, exploration of space.