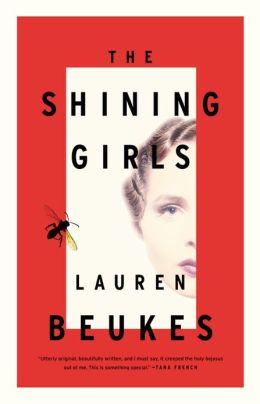 Having just posted Gary K. Wolfe’s Locus review of The Shining Girls by Lauren Beukes, it’s timely for me to spend a few minutes adding my own reaction.

To summarize very briefly (since you can read Gary’s summary right there), the novel is about a serial killer, Harper Curtis, in Chicago who occupies a run-down house (‘The House‘) in a deserted part of the city. The house enables him to move back in forth in time — from 1931 to 1993, at least — and inside the house is a room with names of women on the wall. These are the ‘shining girls‘ that Curtis becomes compelled to seek out and murder. The novel alternates, roughly, between Curtis and a young woman, Kirby Mazrachi, who, unbeknownst to Curtis, survived one of his attacks. Kirby subsequently takes a job as an intern at the Chicago Sun Times to try to track him down.

As in any serial killer novel, I suppose, some descriptions of violence are pretty brutal. But Beukes can write tenderly and movingly too, in passages like this, in which she describes the consequences of one victim’s murder:

Her father will never recover. His weight drops away until he becomes a wan parody of the loud and opinionated estate agent who would pick a fight at the barbecue about the game. He loses all interest in selling houses. He tapers off mid-sales pitch, looking at the blank spaces on the wall between the perfect family portraits or worse, at the grouting between the tiles of the en-suite bathroom. He learns to fake it, to clamp the sadness down. At home, he starts cooking. He teaches himself French cuisine. But all food tastes bland to him.

Gary’s review sort of gives away what I might have thought would be a spoiler. No, not whether the bad guy is caught at the end — rather, what’s up with this House, why *these* girls and not others, say. But I’ll continue under the link…

It’s not a spoiler partly because of the comparison of this book to Audrey Niffenegger’s The Time Traveler’s Wife. Which is to say: there is no explanation for the time travel in this book, any more than there was in that one. It just is. No explanation for why those girls and not others. They just are, they’re victims.

However…. as Gary did not mention in his review… there are suggestions of a Heinleinian “By His Bootstraps” closed loop of causality. The first hint I saw was on page 188 — Curtis gives an old woman the same coat he takes from her later in time (but earlier in the book) — the coat in which he found the key to the House. And then at the very end, when Curtis has been vanquished, a by-passer finds the key that he has dropped, and uses it to enter the house — and this is Bartek, who Curtis earlier/later killed when *he* found the house. So.

Does this ‘explain’ anything, or is it just a bit of cleverness? I think these are nods to readers who might recognize such allusions — as Gary mentioned, Beukes is apparently genre-savvy — but aren’t actually intended as explanations in the Heinleinian sense, or any science fictional sense. So I guess the point is, and Gary’s point in his review is, that devices like time travel are so taken for granted in popular culture that they don’t need ‘explanation’ or justification anymore.