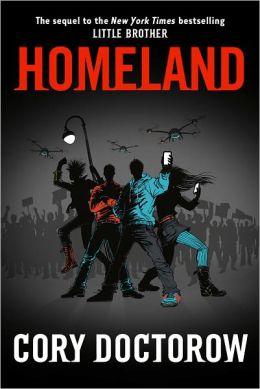 I’d meant to write more reviews on this blog, so let me catch up with a review of a novel I read a few weeks ago – Cory Doctorow’s Homeland. I confess that after the longueurs of his novel Makers, which was preoccupied by theme parks, I didn’t immediately jump on Cory’s subsequent novels, even though I’m generally a fan and admire him greatly as a really smart person doing really good work. But finally I read Homeland, and I’m glad I did.

It’s a sequel to his well-received Little Brother, in which Bay Area teenager Marcus Yallow is subject to DHS — Department of Homeland Security – interrogations following a terrorist attack on San Francisco.

In this book Marcus is attending the annual Burning Man event in Nevada, and runs into a DHS operative he met earlier, Masha, who hands him a UBS stick containing all sorts of incriminating files. In passing.

Marcus explores the files on this UBS stick, meanwhile getting a job as webmaster for an independent California senate candidate. The files on the UBS stick reveal government atrocities – torture by waterboarding and the like – and he decides to release the files to the web before having examined all of the 800K+ documents.

This results in attention from thugs, and demonstrations across the country. Marcus is caught up in one demonstration in San Francisco, and spends an unpleasant night in a detention facility.

As Gary Wolfe mentioned in his Locus Magazine review, one attraction of this book are the elaborate asides; Cory is a geek about so many things. The first 60 or so pages of the book describe Burning Man in great detail, fascinating for anyone like me who’s never been there (or frankly never had any interest in going). Later there are detailed passages about how to defeat lie detectors (p188ff), about software defined radio (p268), about randomness (p153ff), and the miracle of cold-brewed coffee (p56-58).

More significant perhaps are passages that are political. When Marcus first contacts the senate candidate, Joe Noss, he gets an earful (p85-86) about what’s wrong with both parties – though the Republicans are “dunces”—

There are important movers and shakers in the RNC who believe that the Earth is five thousand years old. And these are the people who made their fortunes pumping sweet crude in Texas!

Much later near the end of the book Marcus reflects about whether it really matters who’s elected or not; you get the sense that Doctorow is disillusioned with the current administration.

After all, wasn’t the system the problem? No matter who we voted for, the government always seemed to win. What was the point of living out my little fantasy of democratic change and justice when the real action was being fought out in secrecy, with anonymous envelopes of cash, encrypted whispers, secret bunkers, and secret deals?

So while there’s a definite political subtext to this novel (and Doctorow’s others), it is moderated by other attractions – the geekery, and the remarkable emotional scenes that he provides in scenes with Marcus and his girlfriend. I’m currently half-way through his novel Pirate Cinema, and will have more to say about his range when I cover that book.

The spoiler isn’t quite the point, but I’ll mention a bit below the link.

The files on the UBS stick reveal how a government contractor, Zyz [read Blackwater] got into the business of selling bonds and buying student loans (which never expire), acting like a mafia to collect on loan payments, to the point of claiming parents’ and grandparents’ estates and ruining their lives. The Zyz guys were the thugs mentioned in the summary. At the end of the book, Masha returns and helps him resolve the threat from Zyz.
This entry was posted in Reviews. Bookmark the permalink.