Hawking’s Theory of Everything 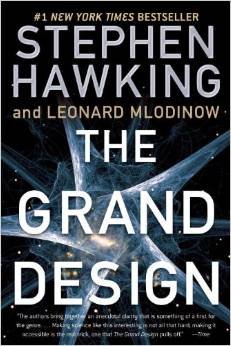 This is the most recent book authored (or co-authored) by Stephen Hawking, the well-known brilliant physicist, subject of the recent film The Theory of Everything. The film depicts (in addition to his personal life) his life’s work to identify a unifying theory of physics, the so-called theory of the title, which for several decades now has remained unresolved to everyone’s satisfaction.

So I read this book, which I had already on my shelves, and took fairly detailed notes, which I’d planned to post here. But then I tried to do a high-level, introductory summary, this evening, and it got so long that I will post only that, and leave my detailed notes to my PC archives.

It took the Greeks to realize that happenings in nature were not the products of capricious gods, but could be understood as consequences of basic forces. The modern concept of laws of nature emerged in the 17th century. The authors emphasize the idea of ‘model-dependent’ realism; many models might ‘explain’ observations, though some models might be considered superior to others in their simplicity.

By the early 20th century the forces of electricity and magnetism had been understood to be united, and other fundamental forces of nature, gravity, and the weak and strong nuclear forces, had been identified and, in the case of gravity, described by Einstein in terms of the speed of light, and how time and space were related.

But a different understanding of these ‘classical’ theories came from exploration by Heisenberg of interactions at the very very small, where particles seemed to behave like waves, and how there are no deterministic laws, just laws of probability about the likelihood of a particle being at any position at any time, like a wave.

So the traditional ‘classic’ theories of physics gradually were superseded by more complex theories that took these ‘quantum’ effects into account. These theories entailed ideas of bosons (e.g. photons), fermions (matter particles, in turn made of of quarks, with various properties), that superseded the traditional notions that atoms were composed merely of protons, electrons, and neutrons.

Physicists then searched for ‘grand unified theories’ (GUTs), that connected all these particles and forces. A potential solution was found in the 1970s, an idea called ‘supersymmetry’, and the attendant idea of ‘string theory’, in which what we think of as ‘particles’ are actually vibrations in one or two dimensions in a universe of ten or more dimensions. (It’s conceptually difficult to imagine; it’s more a matter of how the mathematics works out.)

But it turned out there were several solutions to the concept of string theories. The idea of “M-theory” is that it is a higher-order theory, involving *eleven* space-time dimensions, that places the various five solutions of the string theories into a context that implies that there are many different universes, each with different laws of nature. (Wikipedia actually summarizes all this even more briefly at Introduction to M-theory.)

These different universes, some 10^500 of them (!), have different laws of nature, and different numbers of dimensions, involving lower-order realities that exist within higher-order spaces: vibrating strings, point particles, 2-D membranes, 3-D blobs, and other multi-dimensional ‘branes’ [a term used in THE SCIENCE OF INTERSTELLAR], as well as rules about *how* these extra dimensions are ‘curled up’, which in turn imply values for various physical particles, such as the charge of an electron. I.e., the laws of nature.

And so the authors endorse the ‘strong’ anthropic principle — the fact that since we exist, that the human race exists on a planet able to support life, this has reverse-implications about the physical laws of the universe, the so-called ‘fine-tuning’ of the universe. It’s not that some ‘God’ fine-tuned the universe for our existence; it’s that, because we exist, we must exist in a universe that allows for our existence, while at the same time there are infinitely many *other* universes, with different physical laws, most of which would not allow our kind of life to exist.

The authors conclude by invoking the “game of life”, a computer simulation invented way back in 1970 – a two-dimensional grid with squares that are on (‘alive’) or off (‘dead’), and a simple set of rules about how these squares propagate themselves. [Wikipedia has this page about it.] Amazingly, with a very simple set of such rules, basic initial states develop into relatively complex states, rather lifelike, according to patterns not reduced to simple rules. This is a profound implication, that very simple rules produce complex features like those of intelligent life.

This has implications about free will.

And this is analogous the idea that our universe has spontaneously come into existence.

Because there is a law like gravity, the universe can and will create itself from nothing in the manner described in Chapter 6. Spontaneous creation is the reason there is something rather than nothing, why the universe exists, why we exist. It is not necessary to invoke God to light the blue torch paper and set the universe going.

M-theory is the only candidate for a complete theory of the universe. It is the unified theory Einstein was hoping to find.

The fact that we human beings—who are ourselves mere collections of fundamental particles of nature—have been able to come this close to an understanding of the laws governing us and our universe is a great triumph. But perhaps the true miracle is that abstract considerations of logic lead to a unique theory that predicts and describes a vast universe full of the amazing variety that we see. If the theory is confirmed by observations, it will be the successful conclusion of a search going back more than 3,000 year. We will have found the grand design.

At the same time, Wikipedia has this page about the book, with a relatively brief synopsis, but with extensive reactions, pro and con, from various readers.

Finally, a couple personal comments of my own, which I wrote while partly way through the book.

>> Taking the broadest speculative point of view, I suspect that the difficulty humans have with conceptualizing and integrating these theories is that our own experience and perspective is limited, not just to the scale at which we live (whereas existence is so much different at the very large and very small), but in the way we interact with the world, familiar with certain kinds of sources and not others. (Remember, humans are not very good at perceiving actual forces; it took Newton to disprove the intuitive notion that heavier objects fall faster than lighter objects.) This limitation in how we think of and perceive the world, in terms of physics, is analogous to the limitations of human experience of the world in terms of pheromones and our very narrow perception of the electromagnetic spectrum, as discussed by EO Wilson in the book I summarized over several blog posts.

>> Another possibility: perhaps mathematics, as conceived by human beings, actually *doesn’t* work. It’s been often remarked about how amazing it is that the universe is susceptible to principles we humans can summarize in terms of mathematics we have conceived. But our difficulty in resolving the various pieces of these theories into a unified whole suggests that perhaps this is not entirely true. What could *that* possible mean?