Jordan Ellenberg, How Not to Be Wrong 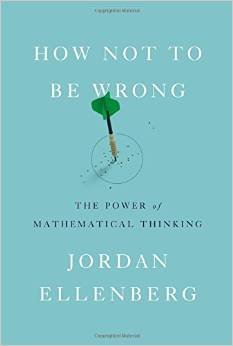 This is the first of what may turn out to be several posts about this book, an examination of several basic principles (linearity, inference, expectation, regression, and existence) and how they apply to every-day, real world situations, situations that are often misunderstood by ordinary “common sense”. The author, a one-time child genius, is a professor of mathematics at the University of Wisconsin-Madison, and has written for Slate, Wired, and other publications, including an occasional column for Slate.

The book is breezily written, with only rare equations, though with occasional very detailed examples described in words. Also, it’s over 400 pages long, which is why I’m not waiting to compile all my notes on it in a single post. (I’m just over half-way through.)

The introduction addresses the common question from math students: when will I ever use this? Ellenberg’s answer is that math is about understanding how to reason; “Math is a science of not being wrong about things, its techniques and habits hammered out by centuries of hard work and argument.”

He gives an historical example, about an engineer thinking about where to apply extra armor on World War II fighter planes, from examining bullet patterns on returning planes. Extra armor where there are the most bullet holes? No, that’s the obvious answer, and it’s wrong, because they weren’t seeing the planes that didn’t return….

“Mathematics is the extension of common sense by other means.” It may be obvious to most people that a + b = b + a, but math extends such principles to more complex conclusions that are not obvious at all.

Author advises that the book covers ideas that are profound (not shallow) and simple (not complicated); one quadrant of ideas out of the four.

Part I is about Linearity, the idea that trends change along straight lines.

His first example is political and economic. The libertarian Cato Institute wondered at one point why Obama wanted to make America *more* like Sweden, when Sweden itself was pulling back on its benefits and taxes, i.e. becoming *less* like Sweden. The implicit relationship is a linear one, a graph with prosperity and Swedishness as the axes, and the extremes labeled sardonically by the author as “Libertopia” and the “Black Pit of Socialism.”

Ellenberg’s point is that this linear relationship is overly simplistic; the actual relationship might well be more like the infamous Laffer curve, in which the relationship is an arc, with an optimum balance between taxes and government revenue somewhere in the middle, with (for example) the US to one side of the peak, Sweden to the other, both moving in opposite directions to find that optimal balance.

(This reminds me inevitably of the perpetually simplistic policy of the Republicans, and libertarians: there is no economic state, good or bad, for which the solution is not “cut taxes”! If the economy is doing well, then people need to get back more of their money (this was Bush 2’s justification, after the prosperity of the Clinton years); if it’s doing badly, then stimulate it by cutting taxes (Reagan’s ‘trickle-down’ economy, long-since discredited). This policy always benefits the wealthy corporations who support Republicans; coincidence?. And there’s never, ever, any discussion of circumstances in which taxes might need to be *raised*. Because everyone hates taxes, right? End of story. [Still, reality strikes back: cf. currently the economies of Kansas, and Louisiana; contrast California.])

Ellenberg acknowledges that the Laffer curve is still controversial, and suggests that the ‘real’ curve might not be so simple. But his point is that to assume a *linear* relationship here is almost certainly false.

The next chapter explores how, at small enough scales, all curves *are* straight lines; thus calculus. And discusses the paradoxes and dangers of infinities; Zeno’s paradox; what the infinite series 1+1-1+1-1+1-1… means. His answer: playing with such series don’t make sense in ordinary arithmetic terms; you need to *assign* values for such series, in order to avoid contradictions. (That series means 1/2. And 0.999999…. = 1.)

Next chapter: avoiding simplistic trend extrapolations that lead to implausible conclusions, e.g. “by 2048 all Americans will be obese”. Or calculating the relationship between college cost and SAT scores. But you can’t do that, these things are probably not linear.

Fourth chapter in this section: “How Much Is That in Dead Americans?” More implausible conclusions by extrapolating (linear) proportions, e.g. saying 1400 Palestinian deaths is the equivalent of 300,000 American deaths (based on total population of both groups). You can realize this thinking is flawed by extending the proportion to ridiculous extremes – e.g. if one of two people is beat up, is it useful to compare that to half of the entire population being beat up? Well, no.

Better to study rates. But they have perils too. Interesting example of study that calcuated rates of deaths by brain cancer, which reveals that small, relatively less populated states lie at *both* ends of the range. Why? Because random variation has a greater effect in small groups than in larger ones; keep expanding the population, and random fluctuations cancel each other out. The so-called “law of large numbers”. Similarly, the best basketball scorers tend to be those who played very little, and happened to have gotten lucky. Another example: performance of individual schools; bigger schools lie in the middle of the range. Actual distribution is the ‘normal curve’, shaped like a gendarme’s hat.

(This reflects one of my own heuristics about any kind of prediction or trend: imagine the trend take to the extreme, and see if it still makes sense.)

Fifth chapter in this section: “More Pie than Plate”. The dangers of proportions, when trends can be either positive or negative. Example of Scott Walker of Wisconsin claiming his state had provided 50% (!) of the job growth in one period across the entire nation. No — because the national job growth was a mix of gains and losses from all the states.

Another: a Romney campaign claim that under Obama, 92% of job losses were suffered by women. No; they were comparing numbers that were composites of many gains and losses…

End of Part I, of V. (That the examples of bad math so far come from conservative/libertarian groups I will let speak for themselves. Surely liberals and progressives aren’t blameless, and I will note any of those in future posts about this book.)