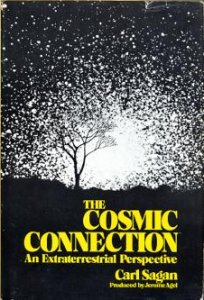 The Cosmic Connection, published in 1973, was the first popular book by Carl Sagan, after some academic tomes and an anthology of essays about UFOs, who later gained much fame as the author and host of the 1980 book and TV series Cosmos (recently remade with Neil deGrasse Tyson as host, and Sagan’s widow Ann Druyan as author), and who wrote numerous other books, including the novel Contact, before his premature death in 1996 at the age of 62.

It was a foundational book in my own experience, likely the first nonfiction book I read aside from those by SF authors like Isaac Asimov and Arthur C. Clarke, certainly the first (aside from those authors) that explicitly evoked the vastness of the universe and humanity’s place in it. And it was one of the first hardcover first editions I acquired, in days when I bought mostly paperbacks and SF book club editions.

(I had requested the book as a birthday gift from my grandmother, in fact. Thinking back, I can reconstruct how I heard of the book in the first place (since the bookshops I frequented did not carry hardcovers at all). In Fall 1973 I began college at UCLA, and soon discovered the original Change of Hobbit bookstore a few blocks away in Westwood, and at that store, copies of a (then) biweekly newsletter (it was mimeographed and stapled together, not yet a magazine) called… Locus. And Locus, in due time, reported the winners of the second annual (1974) John W. Campbell Memorial Award, which included a special award for Nonfiction Book to… The Cosmic Connection by Carl Sagan. The awards were made in April, and likely reported in Locus in May. I had never heard of or seen the book, but made a birthday request to my grandmother on the basis of the Campbell win. My grandmother had to special order it from a local bookstore (in Apple Valley CA), which entailed waiting for 2 or 3 weeks for it to be shipped by the publisher from New York. That’s how those things worked in those days. She got it in June, and went ahead and gave it to me, even though my birthday wasn’t until August. (Knowing nothing about the content or subject of the book, she was a tad mortified to see that back dust jacket depicted the Pioneer plaque, which included line drawings of a nude human male and female.)

The Cosmic Connection, subtitled “An Extraterrestrial Perspective”, has an unusual co-author credit, “produced by Jerome Agel”. I gather “producer” is some combination of editor and packager; Agel’s earlier credits included The Making of Kubrick’s 2001, a fat paperback compilation of background material, reviews, and commentary on that film (which I read obsessively after seeing the film twice on its initial release in 1968), and the Sagan book was apparently commissioned by Agel. The contents of Sagan’s book, some 39 chapters in three sections, are shortish essays on related themes, but semi-independent as if composed in response to (I’m speculating) a list of specific topics Agel developed with the author…. and which can mostly be read in any order.

So how does the book hold up 40 some years later? There’s still lots of inspiring stuff. The entire middle section, on The Solar System, is understandably dated, concerning then current discoveries about Venus and especially Mars, via Mariner 9. There is a certain you-are-there historical thrill in the chapters about Mars, as observers decipher various kinds of data and realize for the first time that there are some *really big* volcanoes on Mars…

The opening section, Cosmic Perspectives, and the final section, Beyond the Solar System, are mixtures of casual thoughts, provocative insights, and profound speculations. Here are some highlights:

And that is what I was reading at age 18.