Steven Weinberg, TO EXPLAIN THE WORLD 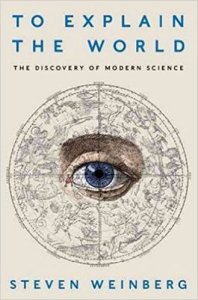 Steven Weinberg is a Nobel Prize-winning physicist who is best known (I gather) as a leading proponent of the idea that progress in physics will ultimately lead to a small set of fundamental principles that explain everything — i.e. the concept of ‘reductionism’. (An idea that is common but that is not shared by everyone.) His famous early books were The First Three Minutes (1977) and Dreams of a Final Theory (1993), both books I have, but read so long ago I don’t have any summaries at hand.

This new book is not so much about the history of science, as about the history of how the idea of science emerged over the past three millennia. Nevertheless it does provide a history of science, at least of physical science (astronomy and physics) from the Greeks through Newton, and so there are many familiar stories and ideas here. But Weinberg recounts these historical events with attention to what those people were thinking about at the time, and how their ideas relate to the modern concept of science. (He explains in his preface why he talks about the “discovery” of science rather than the “invention”.)

Thus: the early Greeks, familiar from basic courses in science and philosophy. Thales, who thought the world was composed of water. Anaximander, who settled on air. Xenophanes: earth. And Heraclitus: fire. The idea of four elements, water air earth and fire, came from Empodocles, in the mid-400s BC. Then came Democritus, with his idea that all matter was composed of tiny indivisible particles called ‘atoms’…

Weinberg’s point is that these propositions were essentially poetical. No one of that era thought to defend these ideas against any kind of real world experience, let alone experiment. (There was nothing in those days like the modern idea of performing experiments to test hypotheses.) Zeno claimed, famously, that motion is impossible, because of his eponymous paradox — but he didn’t bother to explain why motion does in fact happen.

This is the theme that extends through the book: that the tentative ideas we retroactively identify as early ‘science’ were in fact modes of thought quite unlike our modern, rigorous idea of the scientific method. As the author puts it, “The progress of science has been largely a matter of discovering what questions should be asked.” (p29.7), and “This progress [of science] has been something objective, not just an evolution of fashion. … It was never fruitful to ask what motions are natural, or what is the purpose of this or that physical phenomenon.” (p29.9) The point is how difficult it was for someone even as intelligent as Aristotle to learn about nature; “Nothing about the practice of modern science is obvious to someone who has never seen it done.”

There wasn’t much distinction between ‘science’ and ‘philosophy’ for thousands of years. A running theme in the book is the distinction between the mathematicians and astronomers, on the one hand, who developed elaborate schemes to predict the positions of the planets, the lengths of the seasons, and so on — these adhered to Plato and Ptolemy and latter’s ‘epicycles’ — and the philosophers and physicians, allegiant to Aristotle and his teleology and, incidentally, astrology. The latter group liked to think of themselves as concerned about true reality, treating the methods of the former group as tricks for the sake of accuracy, but not, you know, *real*. This split persisted for nearly 2000 years, until Copernicus.

And so the book follows developments in ‘science’ and ‘philosophy’ over the millennia, during which there was little distinction between astronomy and astrology, chemistry and alchemy (it wasn’t until the 19th century that the goals of alchemy were proven impossible; before that, it was not an illegitimate goal).

The book provides useful historical overview, including a summary of the many Arabic scientists who preserved the Greek thinkers, and who made advances of their own, while Christian Europe wallowed in the Dark Ages, for a thousand years. (The Arabic influence on modern thought shows up in our words for algebra and algorithm, as well as many of our common star names.)

In Europe, Thomas Aquinas tried to fuse Aristotle with Christianity, and had his books, and Aristotle’s, banned by the Catholic Church.

Finally in the 15th and 16th centuries came Copernicus, Tycho, Kepler, and Galileo. Copernicus’ idea that the sun is the center [of the universe, he assumed] dramatically eliminated the complexities of the Ptolemaic system, at the expense of demoting Earth to just another planet [the first of many demotions of mankind from the center of everything], with, of course, attendant religious condemnation. Tycho, famous for his observation of a ‘new star’ [nova] in Cassiopeia, thus disproving Aristotle’s contention that the heavens are perfect and unchangeable (so much of Aristotle was later proven wrong), nevertheless resisted Copernicus, and tried to recast his system with the unmoving Earth back at the center.

Johannes Kepler came along and combined Copernican theory with the notion, derived from Plato, that the five regular polyhedrons (cube, octohedron, etc.) should somehow fit between the orbits of the planets. This strikes me as an extreme example of thinking that something pretty must necessarily be true, and Weinberg notes that this tendency still exists, and how Kepler’s conclusion was somewhat reasonable considering that he assumed the solar system was the entire universe… with the analogy that modern cosmologists resist the idea of a multiverse because of the assumption that our observable universe is the only one that exists…

And then Galileo, who studied falling bodies, who acquired a ‘spyglass’ and refined it, and with it saw the outer universe beyond what the naked eye could perceive for the first time in human history: the mountains on the moon, the many more stars than are evident by that naked eye, that the planets are globes — and some, like Jupiter, have moons orbiting them — and some, at least Venus, has phases like the moon does; and that there are spots on the sun [yet again refuting the ancient idea that the heavens are perfect and unchanging]. These observations were published in 1610. Religious authorities objected because his observations contradicted passages in scripture (and they refused to look through his telescope), and in 1616 the church banned his books. His books remained banned until 1835, and it wasn’t until 1979 that the Pope admitted that the church had been wrong.

Weinberg considers Francis Bacon and Rene Descartes, often regarded as key figures of the scientific revolution, overrated. Bacon stressed that science must have practical value — a position echoed by modern politicians who ridicule (and try to de-fund) pure scientific research for its own sake. (The notorious case in the US, likely hopefully forgotten, was Wisconson senator William Proxmire.) And Descartes, famously skeptical even of human senses (thus his famous claim that the only thing he could be sure about was “I think, therefore I am”.) His own scientific work was mostly wrong — his ideas about the soul, the nature of light, of ‘God’ — though he did make contributions in analytic geometry (Cartesian coordinates!) that enabled him to write algebraic equations and solve systems of multiple equations. He partly solved how rainbows work. Yet his books were also banned by the church. Weinberg makes the point that both Bacon’s and Decartes’ claims to rule or prescribe how science should work… were misguided. Were not useful, in the long run.

With Isaac Newton, born 1642, we get the climax of the scientific revolution. (Newton was an odd fellow; he never travelled much, and perhaps never had sexual relations with anyone in his entire life.) He invented calculus [with competition from Leibniz; eventually they were both acknowledged], and he applied the idea to his insight that the same force that drops an apple to the ground is the reason the Moon orbits the Earth — he united the celestial and the terrestrial. His book Principia, in 1687, was the model of a scientific work, beginning with definitions (of what we now call mass, momentum, etc.), a statement of conclusions, i.e. ‘laws’, his famous three laws; and then an exploration of those laws’ corollaires and consequences, all the way to explaining, once and for all, the solar system, and how the planets move around the sun. His notion that ‘gravity’ exists without any ’cause’ upset the religious folk, of course. Yet — even Newton figured that ‘God’ must have a hand in guiding the planets on their tracks, or else why wouldn’t the solar system eventually degenerate? (This is not a bad question — modern astronomers have concluded that the solar system may in fact be chaotic, over millions of years; and this [my added thought, not something Weinberg wrote] might explain the occasional weird orbits of some of the planets in our system.)

What strikes me in this historical account is how the early ‘scientists’ were driven by what can be seen in retrospective as biases of the human mind. The early Greeks, Plato especially, were committed to the idea that the heavens were ‘perfect’, that therefore the planets *must* be moving in perfectly circular orbits, since the circle is the perfect shape, and moving in perfectly steady motions. This assumption hobbled the human comprehension of reality for two millennia — until the realization, by Copernicus and Kepler and Newton, that perhaps the planets were moving not in circles but in ellipses… a betrayal of human assumptions about perfection, but which led a better comprehension about what is real.

This is a lesson to be kept constantly in mind. The contrast between what humans presume must be true, based on subjective experience, compared to what, on the basis of evidence and experimentation, turns out to be true. PvC: the difference between perception and reality.

It is not that the modern scientist makes a decision from the start that there are no supernatural persons. That happens to be my view, but there are good scientists who are seriously religious. Rather, the idea is to see how far one can go without supposed supernatural intervention. Only in this way can we do science, because once one invokes the supernatural, anything can be explained, and no explanation can be verified. This is why the ‘intelligent design’ ideology being promoted today is not science–it is rather the abdication of science.