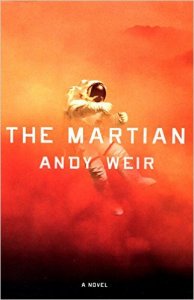 I don’t have a lot to say about Andy Weir’s THE MARTIAN, which I finally picked up because 1) it’s popular, having been on bestseller lists for months, and 2) Ridley Scott’s film version arrives on October 2nd (which Gary Westfahl will review for Locus Online). The book is much like the film Gravity — a series of disasters and survival challenges that you know our hero will overcome because he’s the hero and has to survive by the end (or else, in each case, there wouldn’t be the Hollywood movie). It might well make a brilliant, tension-filled, extravagantly staged Hollywood film. But as a novel…it’s boring. There are a couple unexpected plot twists, but little suspense given the set-up. The plot is about our stranded hero on Mars facing one challenge after another, every 30 pages or so, and of course he overcomes them all. It’s a great book for techies into endless details of jury-rigging broken-down spacecraft, or setting up chemical conditions to grow potatoes in Martian soil. I’ll be fascinated to see how that plays out in the film. The book grates in two ways: the character’s persistent wise-acre attitude, no matter what the circumstances; and the book’s obsession with 1970s pop culture, as if all the astronauts involved were born in the ’60s [as I’m guessing the author was, of course], rather than, presumably, about now. It’s easy to imagine these issues disappearing in the film.