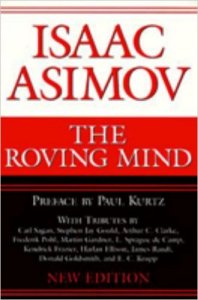 I switched gears a couple weeks ago, after reading several recent (2014 and 2015) novels, to spend some time revisiting one of the 20th century’s most acclaimed science fiction authors, Isaac Asimov. It’s hard to tell, at this point about 1/8th of the way into the 21st century, how his legacy is holding up. For much of the 20th century, Asimov was regarded as one of the three pillars of science fiction: Asimov, Clarke, Heinlein. (With Bradbury, more of a fantasy author, off to the side.) Asimov was of course one of the first SF authors I discovered, back in my late-’60s teenage years, ironically (as I’ve remarked before), via a movie tie-in novel, that for Fantastic Voyage. Between paperback shops and the Science Fiction Book Club, I quickly acquired and read as many Asimov books as I could, as I also did for Ray Bradbury and Arthur C. Clarke, with Heinlein coming along somewhat later.

Isaac Asimov has been revered for decades as one of the greatest authors of science fiction. He wrote hundreds of stories, and hundreds of books (!) — not all of them science fiction: he had a PhD in biochemistry, but he was an autodidact, conversant in all fields of science, as well as culture; he wrote volumnuous guides to Shakespeare, and the Bible, for instance, applying his rational worldview to the analyses of these texts for what they indicate about the real world. He lived all his late life in a high-rise apartment in New York City, seldom traveled, and worked every day, taking no holidays. He loved to write. (At the same time, his interest in music did not extend beyond Gilbert and Sullivan operettas.)

His legacy thus involves many hundreds of books, and many dozens of stories, most of which are negligable in the long run. His run of published books, somewhere around 500, included short books for children and anthologies co-edited with others, especially Martin H. Greenberg. But the couple three dozen stories and novels that might endure established concepts that have become landmarks of the SF field, and in recent decades, popular culture; he was the great rigorous thinker of early science fiction, and it is to him we attribute some basic concepts as the laws of robotics and the pattern of galactic civilization, should it ever take place.

This is the first of several posts I’ll do about Asimov, beginning with a book of essays I picked up a couple months ago, a volume on my shelves I had not previously read, called The Roving Mind. The edition I have was assembled after Asimov’s death, with a preface by Paul Kurtz, and tributes by Carl Sagain, Arthur C. Clarke, Martin Gardner, and many others.

It’s a collection a short essays Asimov wrote for various publications — from Christian Science Monitor to New Jersey Bell Journal to Washington Post to TV Guide to Mechanix Illustrated — all mostly in the early 1980s, as well as a few that were commissioned but not accepted, as Asimov ruefully notes.

As in his fiction, it’s apparent that Asimov published virtually all his works from first-draft, with rare rewriting or editing; I’ll have more to say about this when discussing his early short fiction.

The collection of essays at hand begins with six essays on “The Religious Radicals”, and this is notable because these address issues that still plague us now, via the Religious Right and various other conservatives. Asimov was never a blunt atheist, in the sense modern writers like Richard Dawkins and Sam Harris are, but he was blunt in his dismissal of those who would attempt to intrude religous concepts into modern classrooms. The first essay in the book, “The Army of the Night”, begins “Scientists thought it was settled.”, and then goes on to efficiently address and dismiss the common arguments by creationists against evolution: the arguments from analogy, from general consent, from belittlement, from imperfection, from distorted science, from irrelevance, from authority. This essay is from the New York Times Magazine in 1981. There remains, and I suspect will always remain, a portion of the population immune to logical arguments in favor of adherence to the traditional religous narratives of their local society.

Further on, there’s an essay called “Don’t You Believe?”, in which Asimov replies to the common thoughts of people about science fiction authors, that they surely “believe” in flying saucers, telepathy, the Bermuda triangle, and so on. It displays the methodical rigor Asimov applied to any such question. He replies,

I believe in evidence. I believe in observations, measurement, and reasoning, confirmed by independent observers. I’ll believe anything, no matter how wild and ridiculous, if there is evidence for it. The wilder and more ridiculous something is, however, the firmer and more solid the evidence will have to be.

And then he goes on to consider telepathy, in several methodical steps, which I will summarize here:

1, If telepathic ability existed, it would have great survival value; “Telepaths would be better off, would live longer, and would have more children (who would also be telepathic, most likely)”;
2, The mere fact that we are trying to find out if telepathy exists is strong evidence that it does not exist — because if it did, it would be an overriding ability we would take for granted.;
3, Or perhaps telepathy requires advanced brains that have only recently begun to exist, such that initial efforts are only barely detectable in some people;
4, But if telepathy is possible and has survival advantage, it should have developed far earlier;
5, Yet if it does require advanced brains, might it explain how leaders in politics, business, religion, and science came to be such leaders?
6, Yet there are so many examples of such leaders who have been fooled, deceived, and betrayed. Julius Caesar; Napoleon; Hitler

And so, “we see a world that simply doesn’t make sense if telepathy exists.”

This is a basic example of Asimov’s methodical thinking, which also informs many of his stories, about which I will describe in future posts.