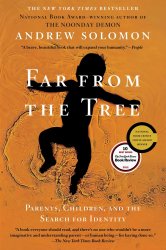 This is an enormous book, 962 pages long, 702 of that text (with the remainder consisting of encyclopedic notes, a lengthy bibliography, and an index).

The book is about how parents deal with exceptional children, covering ten categories of exceptionality, in the titles their chapters: Deaf, Dwarfs, Down syndrome, Autism, Schizophrenia, Disability, Prodigies, Rape, Crime, and Transgender.

Two bookend chapters — “Son” and “Father” — touch on the author’s own relationships to his father, as a son; and then his late-in-life decision to become a father himself, which, as a gay man, he did via surrogacy.

I haven’t read the whole book, just the bookend chapters and the chapters about autism and prodigies. I knew of Andrew Solomon, best known before this book for one on depression (The Noonday Demon), and had heard his TED talk several months ago discussing the themes of this book and his journey to becoming a father himself, Love, No Matter What. Then a couple months ago there was an essay in Slate, For Gay Parents, Deciding Between Adoption and Surrogacy Raises Tough Moral Questions, that mentioned Solomon’s book and waggled a finger at him for not taking the option of adoption more seriously. (Well, everyone in such a situation considers these things, and reaches their own decision; who is John Culhane to judge? Was my reaction.)  So I ordered the book and over the past few weeks have read significant chunks of it.

Solomon is a mesmerizing writer, and he spent 10 years researching this book, interviewing 300 families (including on many topics not included in the final cut of the 10 categories listed above). His narrative alternates been journalistic accounts of the conditions themselves, their histories, and how society deals with them, with anecdotal accounts of the families or individuals he meets. Those case studies range from excruciating to revelatory. Solomon’s narrative is a blend of cogent summarizing of exhaustive research, with matter-of-fact reflection that displays striking insights.

A few highlights and quotes from the chapters I read. (If I had more time today, I would have condensed it.) In the middle two chapters, I’m mostly omitting the many case studies he relates.

One resolves cognitive dissonance by assimilating what it is too late to change, and in that spirit I wonder whether I would have found as much joy in marriage and children if they had come easily—if I had been straight or had grown up thirty years later in a somewhat more welcoming society. Perhaps I would; perhaps all the complex imagining I’ve had to do could have been applied to broader endeavors. I believe, however, that the struggle has given me a vision as a parent that I would not have had without it. So much of me had been consecrated to loneliness, and now I am not lonely anymore. Now, children make me happy. A generation ago, this love would have stayed dormant and unrealized. But so, too, would much of the love described in this book, the love of all these parents for children who would once have died young or been put away or lived unacknowledged as fully human. My family is radical for a different reason from most of the others I have chronicled, but all of us are exponents of revolutionary love against the odds.

Given how unimaginable my family would have been fifty years ago, I have no choice but to champion progress; change has been good to me, and I am indebted to it. I hope these stories will contribute to the cataract that is honing the rough surface of the world. Until the planet grows smooth, however, love will continue to toughen under siege; the very threats to love strengthen it even as they suffuse it with pain.

This entry was posted in Children, Culture, MInd, Psychology, The Gays. Bookmark the permalink.