Pinker: Better Angels: Passages and Outline from the Preface 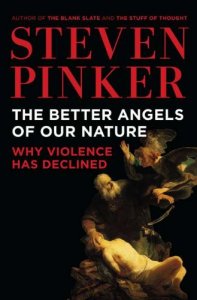 This is Steven Pinker’s big 2011 book, The Better Angels of Our Nature: Why Violence Has Declined, that takes a long-range view of human history to show that the human condition, over millennia and especially in recent centuries and decades, has vastly improved in terms of the reduced likelihood of any person dying of violence.

I’ve dipped into this book before, including some quotes of its brief discussion of violence in the Bible — in this blog post (scroll down). And it’s gotten huge plugs from the likes of Mark Zuckerberg and Bill Gates (e.g., http://time.com/money/4780337/bill-gates-book-recommendation-better-angels-steven-pinker/, among many other links). There’s a long Wikipedia page, which I’m not looking too closely at before reading the book for myself. Here’s my take on the first 8 pages– the preface.

page xxi.3: “Believe it or not—and I know that most people do not—violence has declined over long stretches of time, and today we may be living in the most peaceable era in our species’ existence.”

And how it relates to the idea of modernity (nice definition):

xxi.6: “How, in particular, are we to make sense of modernity — of the erosion of family, tribe, tradition, and religion by the forces of individualism, cosmopolitanism, reason, and science?”

And the book’s scope:

xxii.2: “This is a big book, but it has to be. First I have to convince you that violence really has gone down over the course of history, knowing that the very idea invites skepticism, incredulity, and sometimes anger. Our cognitive faculties predispose us to believe that we live in violent times, especially when they are stoked by media that follow the watchword ‘If it bleeds, it leads.’ The human mind tends to estimate the probability of an event from the ease with which it can recall examples, and scenes of carnage are more likely to be beamed into our homes and burned into our memories than footage of people dying of old age. No matter how small the percentage of violent deaths may be, in absolute numbers there will always be enough of them to fill the evening news, so people’s impressions of violence will be disconnected from the actual proportions.”

(this last sentence an observation I’ve made several times; many people are especially prone to be panicked and alarmed by nightly news anecdotes)

xxiii.3: “A large part of the book will explore the psychology of violence and nonviolence. The theory of mind that I will invoke is the synthesis of cognitive science, affective and cognitive neuroscience, social and evolutionary psychology, and other science of human nature that I explored in How the Mind Works, The Blank Slate, and The Stuff of Thought. According to this understanding, the mind is a complex system of cognitive and emotional faculties implemented in the brain which owe their basic design to the processes of evolution.”

(I appreciate his use of the Oxford comma.)

Six Trends (chapters 2 through 7)
1. Transition to agriculture, over a scale of millennia beginning ~5000 years ago, with a reduction in chronic raiding and feuding: the Pacification Process
2. Consolidation, especially in Europe, of patchwork feudal territories into large kingdoms; the Civilizing Process
3. Beginning with the Age of Reason and the European Enlightenment, organized movements to abolish socially sanctioned forms of violence (…); the Humanitarian Revolution
4. How since World War II, the great powers have stopped waging war on one another; the Long Peace
5. Since the end of the Cold War in 1989, organized conflicts of all kinds have declined throughout the world; the New Peace
6. In the postwar era, a ‘growing revulsion against aggression on smaller scales, including violence against ethnic minorities, women, children, homosexuals, and animals.’ The Rights Revolution.

Four Better Angels (chapter 9)
1. Empathy
2. Self-control
3. Moral sense
4. Reason – “allows us to extricate ourselves from our parochial vantage points, to reflect on the ways in which we live our lives, to deduce ways in which we could be better off, and to guide the application of the other better angels of our nature.”

Five Historical Forces (chapter 10)
1. Leviathan – “a state and judiciary with a monopoly on the legitimate use of force…”
2. Commerce – “a positive-sum game in which everybody can win…”
3. Feminization – “the process in which cultures have increasingly respected the interests and values of women. Since violence is largely a male pastime…”
4. Cosmopolitanism – “that can prompt people to take the perspective of people unlike themselves and to expand their circle of sympathy to embrace them.”
5. Escalator of Reason – “an intensifying application of knowledge and rationality to human affairs.”

This is a big book that will take me a while to work my way through. It’s been on my to-read shelf for years. I’m finally motivated to take it on, with the news that Pinker has a new book on the way, one that is sort of a sequel to this one: Enlightenment Now: The Case for Reason, Science, Humanism, and Progress, due next February (https://www.amazon.com/Enlightenment-Now-Science-Humanism-Progress/dp/0525427570/).