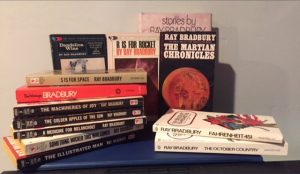 In January 2018 I began a grand, systematic, plan to revisit the books by the core authors of science fiction. I’ve explored some of the books by these authors in recent years, and have posted reviews and comments about them on this blog – by Asimov, Heinlein, Clarke. Now I’m trying to be more systematic, and thorough, as if to visit them one more time, in the mildish golden age of my years, and document my mature thoughts on works that – by these authors at least – I first read as a teenager.

And so in January I sat down and revisited my shelves of books by Ray Bradbury. Bradbury was likely the earliest sf/f author I discovered, as a teenager, when I was age 13 or 14. It’s possible that what attracted me to his books was merely that a couple of them were available as Bantam Pathfinder editions, and as I described in this post, http://www.markrkelly.com/Blog/2016/06/30/15-ways-of-buying-a-book-part-1/, under Way #4; I had a predilection at that time for publisher brands, and bought many Bantam Pathfinder editions just because I liked that format. The Bradbury books in that format were DANDELION WINE and R IS FOR ROCKET.

In any event – I don’t remember the details after all these years – I liked those books by Bradbury sufficiently that I went out to find all other available Bradbury books at the local Pickwick, the mall chain store common at the time. Most of his books were available in Bantam paperbacks, and I bought all I could find, and read them in short order.

Over the decades, as I’ve moved through the fields of science fiction and fantasy, reading widely, I have not reread much Bradbury, except for THE MARTIAN CHRONICLES, every decade or so.

Now, in 2018, I’m rereading Bradbury in more or less order of book publication. I never had a copy of the 1947 DARK CARNIVAL, his first collection from Arkham House, but I’ve understood that his later collection THE OCTOBER COUNTRY, from Ballantine in 1955, retained many of those early stories, some of them revised, and even though that book postdates THE MARTIAN CHRONICLES (1950) and THE ILLUSTRATED MAN (1951) and even FAHRENHEIT 451 (1953), it’s the book I began my 2018 reread with.

The photo here is of my vintage paperback collection of Bradbury books I acquired in the 1960s and ‘70s, which were not always the editions I’ve read this past month.

This entry was posted in Ray Bradbury, science fiction. Bookmark the permalink.