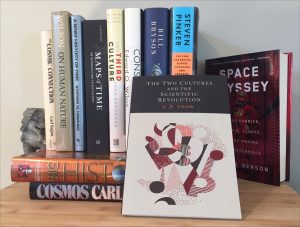 C.P. Snow’s “The Two Cultures” is the famous 1959 lecture and then essay about the divide between the scientific community and the literary ‘intellectual’ community, an essay much referenced in books about the acceptance of science in modern culture (with, for example, several references in Steven Pinker’s ENLIGHTENMENT NOW, which are what prompted me to buy a copy of Snow and read it for myself). The essay comes in a little book, shown here in a 2013 printing just 58 pages long, that includes additional topics.

The principal essay is short and to the point. The Wikipedia entry for the lecture, https://en.wikipedia.org/wiki/The_Two_Cultures, quotes a key passage, about how traditional intellectuals have no idea what the second law of thermodynamics might be about, nor care; yet would consider a scientist who’d never read Shakespeare to be uncultured, even uneducated. He notes p4 that “at one pole we have the literary intellectuals, who incidentally while no one was looking took to referring to themselves as ‘intellectuals’ as though there were no others.” As if the work of scientists like Rutherford or Dirac or Einstein was not intellectual.

Snow describes how he was trained as a scientist, but had become a writer, and so had interactions and friends among both groups. He discusses how scientists are thought unreasonably optimistic and unaware of the human condition, while the literary intellectuals lack concern about the future and would deny the progress of science and technology. An apt quote, p15:

They still like to pretend that the traditional culture is the whole of ‘culture’, as though the natural order didn’t exist. As thought the exploration of the natural order was of no interest either in its own value or its consequences. As though the scientific edifice of the physical world was not, in its intellectual depth, complexity and articulation, the most beautiful and wonderful collective work of the mind of man.

There are worlds of commentary about this essay, easily found via Google, from critical responses at the time, to later re-evaluations, to references in contemporary books.

But I’ll make a couple points myself anyway: Snow lays the situation primarily at the English educational policies of the time, especially those of Cambridge and Oxford, with their high degrees of specialization. He notes that the educational systems in the US, and USSR, are not so severe. He discusses how the ‘intellectuals’ barely noticed or understood the industrial revolution (Ibsen among writers being an exception), how the poor gravitated toward the factories to improve their lot (a point Pinker makes also, to those who criticize the industrial revolution). And in the final essay of this slim book, he realizes how the industrialized nations are getting richer (and how ‘intellectuals’ don’t appreciate this rate of change [that rate of change being a central theme of science fiction]) and how the poor nations have noticed and will take any help they can get – and if the West doesn’t help them, Russia will. And so the gap between the cultures must close.

This theme about the problems of specialization we’ve seen in essays on SF from the same general era as Snow’s, e.g. three separate essays in Bretnor’s MODERN SCIENCE FICTION (here http://www.markrkelly.com/Blog/2018/01/19/sfnf-bretnor-modern-science-fiction/).

Since Snow there have been a couple prominent developments in this conflict, one relatively recent.

First, the gap between the cultures — at least among the curious lay public — began to shrink, I think, as books by scientists written for the general audience became popular, especially THE COSMIC CONNECTION and COSMOS by Carl Sagan, Hawking’s A BRIEF HISTORY OF TIME, and E.O. Wilson’s ON HUMAN NATURE, not to mention numerous works by Richard Dawkins and Stephen Jay Gould and others.

So by 1995 editor (and agent) John Brockman could publish an anthology of essays, THE THIRD CULTURE, claiming that the culture had indeed shifted, from the literary, classical, and philosophical ‘intellectuals’ to “those scientists and other thinkers in the empirical world who, through their work and expository writing, are taking the place of the traditional intellectual in rendering visible the deeper meanings our lives, redefining who and what we are” (p17). Brockman explores this idea in his introduction, and then fills the book with essays by representative key thinkers on various themes: evolution, the mind, cosmic origins, algorithms, and the singularity. Contributors include Gould, Dawkins, Margulis, Minsky, Dennett, Pinker, Penrose, Rees, Smolin, and many others, and what’s fun is how Brockman lets his contributors comment on each other’s essays. Even as the modern scientific intellectuals agree on the large-scale outlines of evolution and cosmology, they emphasize varying parts, bicker about the importance of details. That’s how science works.

And in 1998 E.O. Wilson published one of his most ambitious books, CONSILIENCE, subtitled “The Unity of Knowledge,” that attempted to show how recent understandings in the physical and biological sciences could illuminate issues in the social sciences, in art, in ethics, in religion. (Meanwhile, as one of Brockman’s contributors points out, p27, when traditional intellectual Mortimer Adler compiled a ‘Synopticon’ index, his entry on consciousness referenced Aquinas, Montaigne, and Aristotle.)

Second, more recently, a movement known as ‘Big History’ has appeared, which attempts to put all of human history into the context of cosmological history – everything from the Big Bang, to the origin of stars and planets, to the development of life on Earth, the evolution of mankind, and eventually the growth of culture and modern human history. This grand scope was written about at least since Bill Bryson’s A SHORT HISTORY OF NEARLY EVERYTHING in 2005 (https://en.wikipedia.org/wiki/A_Short_History_of_Nearly_Everything), and more technically by David Christian in MAPS OF TIME in 2004, with its sections that steadily zoom in on narrowing, more recent slices of the cosmic timeline. The movement has crystallized into a “Big History Project” led by Christian, with a website (https://www.bighistoryproject.com/home), a TED talk, a comprehensive coffee table book, endorsements by Bill Gates, and a forthcoming narrative account by Christian called ORIGIN STORY (https://www.amazon.com/gp/product/0316392006/), which of course I’ve preordered.

And of course, the opening credits of the TV series “The Big Bang Theory” is big history in popular culture.

The point about ‘big history’ is that it places the history that the traditional ‘intellectuals’ know about, the art and literature and philosophy of the past two or three thousand years, into a grander context, one only discovered and appreciated in the last 50-75 years. If you want to know what we know about the age and extent of the universe, or about human consciousness and the mind, don’t look to Mortimer Adler’s references; look to Stephen Hawking and Brian Greene, to Daniel Dennett and Steven Pinker. The best books about what collective humanity knows about the world, through systematic investigation [science], are the latest books, not the most ancient. Because the early philosophers, though their intuitive speculations are fascinating in retrospect, have turned out mostly to be wrong.

Finally, just today, as I’m working my way a chapter at a time through Michael Benson’s history of the making of the film 2001: A SPACE ODYSSEY, I came across this passage that captures how science fiction is a kind of third culture, a blending of art and science, and how 2001 in particular captured that combination. P. 264-265:

At its best, science fiction takes our post-Enlightenment way of understanding the world and extrapolates, using the findings of science and projections concerning the future of technology and putting them at the service of truths expressible through fiction. By the midsixties, astronomy and astrophysics had radically expanded the universe’s dimensions, and the emerging science of paleoanthropology—a discipline rooted in Darwinism, paleontology, and biological anthropology—was starting to revolutionize our understanding of human origins. But rarely had the findings of these broad disciplines been incorporated into artistic expression. Instead, science had effectively been over here, and the arts elsewhere.

It was one of Kubrick’s and Clarke’s great achievements, and a wellspring of 2001’s lasting power and continuing significance, that they took the complex, sometimes haunting, sometimes magnificent truths revealed by modern science, polished them with all the care given an expensive piece of Zeiss glass, and used them as a window to view the human condition within that staggeringly vast universe. Projecting back into the past, 2001’s authors examined human origins. They weren’t particularly doctrinaire about it. This was fiction, not a peer-reviewed paper in the journal Nature. But they always deployed scientific research—and its miraculous offspring, technology—to define their story, refine it, and expand it to its farthest possible limits It’s how they reached the border between the known and unknown—that place science is always probing like a tongue exploring a broken tooth. It’s where they wanted to take their audience, because beyond it, sometime like magic prevails.

This entry was posted in Culture, Science, science fiction. Bookmark the permalink.