This 1956 film is still regarded as an important early science fiction films, and one of the best of the 1950s, even if it shows its age 60 years on. It influenced both Star Trek and Lost in Space, and in turn our notions of what adventures in outer space might consist of. 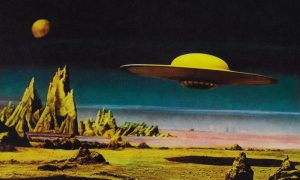 “Skiffy” is a deliberately derisive pronunciation of “sci-fi,” which is a much-loathed abbreviation for “science fiction”; it was coined in the 1950s in analogy with “hi-fi” (that is, high fidelity record players) and its association with the crude science fiction movies of the time made it anathema to writers (and readers) of the usually far more sophisticated SF novels and stories. And “flix” of course is Hollywood headline abbreviation for “flicks,” that is, movies.)

In these movie review posts beginning in 2018, I’m adopting the format of my Star Trek episode reviews: rather than a narrative review or analysis, this is a set of bullet points, annotations as it were, as I step my way through the film, with just enough plot synopsis to put the comments in context. And as with those Trek posts, my comments align along several themes: how the story and premise make sense on their own terms; how they reflect accurate or inaccurate conceptions of the universe; and how they reflect cultural values at the time, which we may or may not sympathize with today. And how film and TV SF differs, in scope and ambition, from the literary variety.