Martin Rees: ON THE FUTURE: Prospects for Humanity (2018) 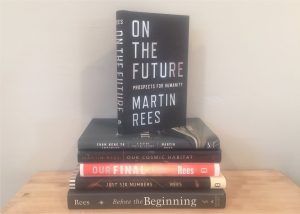 Martin Rees is a British astronomer and astrophysicist who looks rather like Richard Gere (see https://en.wikipedia.org/wiki/Martin_Rees); he holds or has held all sorts of high positions in British science and academia. He’s published several books, of which the half dozen that I have are rather short, because, it turns out, they are often based on series of lectures he’s given. This present 2018 book is partially based on a series of 2010 lectures (already published in a previous book).

This book was preceded by the 2003 OUR FINAL HOUR, which explored various ways humanity might be doomed, through its own actions or through various cosmic catastrophes. That and this new book look superficially similar, but this one has a broader scope.

Much of what he says is familiar, and I’ll try to highlight those points where he comes down on one side or another of some contentious issue – or where he makes some crucial issue pointedly clearly. He handily numbers the issues in each section.

His theme, stated in the preface: “the flourishing of the world’s growing population depends on the wisdom with which science and technology is deployed.”

Ch3, Humanity in a Cosmic Perspective

Ch4, The Limits and Future of Science