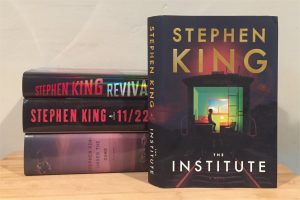 This is a solid contemporary thriller with SF (or perhaps fantasy) elements. As I’ve said before I like Stephen King but read only about his every third or fourth book, just the ones that seem to have some, to me, provocative theme (e.g., the others in the photo).

The book is expertly plotted and structured. It breaks down cleanly into half a dozen blocks of varying sizes. The whole book is about 560 pages.