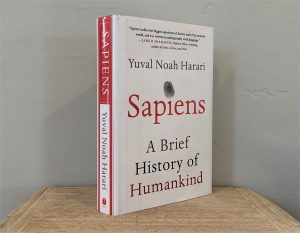 This is a history of the human species in the context of “Big History” – the first page sketches the history of the entire universe as a backdrop – and is a history of trends, discoveries, concepts, and ideas, not of wars and conquests and politicians. It’s been a perennial bestseller since its English-language publication in 2015, and seems to have established itself as part of the cultural zeitgeist, much as Jacob Bronowski’s The Ascent of Man and Jared Diamond’s Guns, Germs, and Steel have. Harari has since published two further books, Homo Deus: A Brief History of Tomorrow and 21 Lessons for the 21st Century, which I’ll summarize here too.

The prime virtue of this book is that it covers an enormous amount of material about the growth and expansion of our species, using the widest possible perspective, and not getting bogged down by the names and dates of conventional history. Harari likes big ideas. Yet at times he’s overly reductionist in collapsing many ideas into those few big ideas.

Detailed summary, with key points bolded and [[ my comments in brackets ]]

Part One, The Cognitive Revolution

1, An Animal of No Significance

[[ Passing thought: is the rejection of evolution, by a large part of the modern population, in part due to distaste at being related to chimps and gorillas—which trigger the same disgust attitude that racists feel when encountering other colors of their own species…? ]]

2, The Tree of Knowledge

[[ This keys with ideas about how religion is *useful*, like nationalism, and perhaps why it should not be disabused? –issue to consider: if every person could recognize all these myths for what they are—would society collapse? What would hold society together? Well, the answer might be, how do freethinkers of various types keep on living? What makes them keep on going? ]]

[[ all of this echoes the big extinctions in Kolbert’s book; in hers everything humans have done is part of her big Six. ]]

[[ and my personal theme is that it’s possible to, privately, understand that all these schemes are not objectively true, and that an objective truth about the nature of the universe can be found, is available to be found, and understood ]]

[[ this recalls a theme among atheist writers, that perhaps it’s not wise to disabuse people of their beliefs, for the maintenance of social order; and the counter-theme that this is condescending, to think that people are not able to handle the truth. Harari suggests that the social order depends on some kind of myth – if not a shared religious one, then a shared nationalist one, or similar. This is why my project only addressed the individual’s ability to step away from the myths and apprehend reality for what it has been found to be, not any attempt to revolutionize society. ]]

[[ again, you can escape the prison through science, but likely only privately ]]

Ch8, There is No Justice in History

Part III: The Unification of Mankind

Ch9, The Arrow of History

Ch10, The Scent of Money

[[ ironically things have backslid a bit since he wrote this ]]

Ch12, The Law of Religion

[[ The end of this chapter is extremely problematic in that author thinks deference to human values is ‘worship’. No no no no no. It’s realism, the recognition that there are no gods to worship, that humans are able to establish their own values. At best his descriptions are analogies. Furthermore it’s increasingly recognized by ‘humanists’ of various shades (and not by folks who think that God is in charge) that it’s not true that “the world and all other beings exist solely for our species” because acting like they do will destroy the planet, and thereby humanity. ]]

[[ I note that conservatives in the US treat the constitution as a kind of holy script, and the founders as some kind of infallible gods. This is again a reflection of a certain kind of thinking; a psychological matter. ]]

[[ p236, might be worth exploring how natural selection, the ‘struggle for survival,’ isn’t about weeding out the weak; the process preserves almost everyone. The process is about responding to changes in the environment, mostly. ]]

Ch13, The Secret of Success

Ch14, The Discovery of Ignorance

Ch15, The Marriage of Science and Empire

Ch17, The Wheels of Industry

Ch19, And They Lived Happily Ever After

[[ and of course the answer is YES, at least for some people – those who study reality and try to understand it, i.e. scientists and philosophers, and likely NO for the vast majority who live their lives in the ancient human roles. And this is perhaps my ultimate PvC: it’s all about understanding reality outside the bubble of merely being human. ]]

Ch20, The End of Homo Sapiens

Afterword: The Animal that Became a God

[[ The final chapter echoes Wilson, in THE MEANING OF HUMAN EXISTENCE, that humanity is on the verge of transforming itself. ]]