Now the fun starts. Having dutifully watched the precursors of science fiction films in the mostly horror films of the 1930s and ‘40s (with just two SF films from before 1950, Metropolis from 1927 and Things to Come from 1936), I’m now beginning rewatches, or perhaps in a few cases first watches, of the principle science fiction films of the 1950s. There were half a dozen a more a year (https://en.wikipedia.org/wiki/List_of_science_fiction_films_of_the_1950s), more than a dozen in some years. (I don’t plan to watch them all; perhaps the best 2 or 3 from each year. Planned list here.) What triggered this eruption? No doubt studies have been done; offhand I’d speculate that the film industry took a few years to recover after the end of World War II, and with the use of rockets (the German V-2s) in that war, and speculation about using rockets to launch into space, ideas for Hollywood films emerged. Also, print science fiction anticipated these themes by decades, but at the end of the 1940s, and early ‘50s, stories and novels about building moon rockets became more plausible, and were more realistically depicted. (e.g. Heinlein’s “The Man Who Sold the Moon”; Clarke’s Prelude to Space, reviewed here, https://www.blackgate.com/2020/06/18/we-have-launch-arthur-c-clarkes-prelude-to-space/ ) 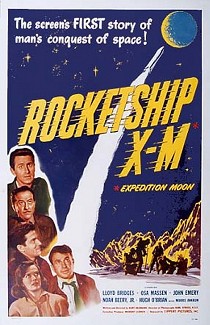 But Hollywood has never been full of scientists or engineers who strive to depict space flight realistically; it is full of entertainers who seek audiences, and so who depict things in ways that are intended to be dramatic, that appeal to audience’s sense of adventure and danger, but that are scientifically illiterate, even nonsensical. (This is a consequence of most people being stuck at the first stage of my hierarchy of awareness, projecting intuitive, even infantile, notions of how the world works, into environments and on to scales where those notions don’t apply.)

And this is the reason I’m watching all these old movies—really, my primary motive. I’m fascinated to see exactly what ideas Hollywood producers, and unschooled scriptwriters, had about how spaceflight would work, or, if there’s a way to tell, what shortcuts and cheats they took, despite knowing better, to appeal to audience biases. (A typical one: how spaceship make swooshing or roaring sounds as they pass. I’m sure many people still don’t understand why this is nonsense, but anyone writing any kind of science fiction should.)

So here we are. My plan is to watch these 30 or so principle SF films from the 1950s in chronological order. There were just two in 1950. The big budget one was Destination: Moon, with a script by Robert A. Heinlein (based somewhat on the story mentioned above), but a lower-budget one was finished and released first, by a month. This was Rocketship X-M, released in May 1950.

The film was written, produced, and directed by one Kurt Neumann; it starred Lloyd Bridges and several others including Hugh O’Brien; it had a musical score by Ferde Grofe. Neumann did the 1958 film The Fly (the first version, with Vincent Price and David Hedison), but otherwise has had no enduring reputation. Ferde Grofe is still known as the composer of the “Grand Canyon Suite,” a piece I grew up listening to (and still hear occasionally on my local classical music FM station), but which today strikes me as 3rd rate Beethoven’s Pastoral. I found his music in this film simply noisy, or sappy; but standards and styles of music change, as I noted about the music in Things to Come. Of the actors, Lloyd Bridges was popular in the ‘60s in a TV series called Sea Hunt, and later featured in the 1980 parody film Airplane! – he was the one in the control room who, increasingly stressed, kept saying things like, “I sure picked the wrong time to give up smoking!” or “to give up crack cocaine!.” And so on.

To the film. In this case it might be easier to summarize the plot relatively briefly, and then make comments.

The first manned rocketship launches, with four men and one woman, on a mission to the Moon. A rocket malfunction sends them far off course, and they reach Mars instead. There they find evidence of a ruined civilization, radiation suggesting nuclear war, and savage natives who kill three of the five. The other two return to Earth but run out of fuel and crash. Despite this, the mission director is confidant a second spaceship will be built.

The film has modest special effects and decent acting, but is marred by typical Hollywood fantasy physics, a dated sexist theme about the woman scientist, and a cliche romantic subplot. The lesson on Mars about the danger of species self-destruction is a bit heavy-handed, but apt for its time.