Film Notes: Summer Stock and others 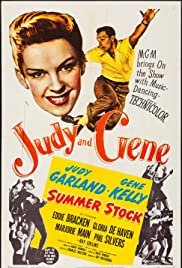 Lately our evening TV has trended toward checking the movie channels around 8pm (after watching the TV game shows Jeopardy and Wheel of Fortune, the former my favorite and the latter Y’s) to see what’s on. We subscribe to a set of HBO channels and a set of Starz channels and TCM, Turner Classic Movies. Usually I’m enough of a purist to see movies only from the beginning, and then watch them to the very end, all the way through the credits, as I always do in theaters. Recently I’ve become more relaxed on the first point, especially for movies I hadn’t been motivated to see when they came out.

(Yet I was fascinated to read an article somewhere recently about how common it was for families in the 1950s to show up at the theater in the middle of the movie, then stay for the next showing until they got to the point where they walked in, and then leave the theater. This strikes me as barbaric. Yet it happened to me once: when my father took me to see 2001 for a second time, back there in Glen Ellyn in late 1968, he got home from work late and so we didn’t get to the movie on time. So we watched the movie as we arrived, I think during the Blue Danube space waltz scenes, and then stayed for the next showing…and so left the theater during the Blue Danube space waltz scenes.

There’s also the point that in those days the theater managers didn’t clear the theaters between showings. You could sit there and watch the movie again and again, without paying more than once. My pals at the time and I did this with Star Wars, in 1977, at the Chinese Theater in Hollywood. We stood in line to get in, and once seated, stayed for two showings. [And then I didn’t bother to watch it again for… 40 years. I thought it was simplistic, juvenile, comic book sci-fi.])

So for example, recently,

And so my thought was, that for every classic movie (or novel), there are 5 or 10 others, on similar themes or with similar actors or by the same writer, that are nearly as good (or perhaps just as good or better depending on your personal criteria) but that are not as well-remembered as that classic.

In “Summer Stock” Gene Kelly’s and Judy Garland’s acting and singing is as good as in any other movie. So why is this film not as well-remembered as, say, “A Star Is Born” or “Singin’ in the Rain”? Perhaps the story, rather more cliched here, or the score, which is mostly just OK yet which has one classic song — “Get Happy”. Gene Kelly does a brilliant dance number in which he improvises a routine from a squeaky floorboard, and a loose rug.

So my thought is that a too tight focus on lists of “all time best” movies or novels or whatever might lead you to miss those many others nearly as good ones. And I’m going to apply this lesson to my own currently in-work project.