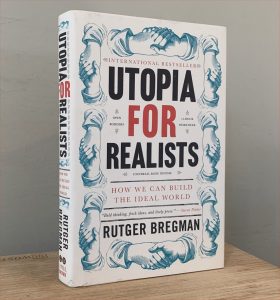 This is a breezy, fast-reading book that summarizes grand conclusions simply and directly, and then provides background references to support those conclusions in 40 pages of notes at the end.

The Dutch author is “one of the continent’s most prominent young thinkers”; the book was published in the Netherlands in 2014, and first translated into English in 2017.

The book starts out in Pinker/Rosling territory, alerting us to the fact that the world has improved greatly in recent decades and centuries, then moves through a constellation of ideas, some intersecting those in Harari’s HOMO DEUS, for improving the world, and ends with some insights from psychology about why people cling to old ideas and have trouble considering anything new. Reminding us in the final lines about how nevertheless – slavery, women’s suffrage, gay marriage – new ideas have changed society.

(I read this book a year and a half ago, and it’s one of a backlog of reading notes I mean to post here, for the benefit of anyone who might encounter this blog.)

1, The Return of Utopia

2, Why We Should Give Free Money to Everyone

3, The End of Poverty

Ch4, The Bizarre Tale of President Nixon and His Basic Income Bill

Ch7, Why It Doesn’t Pay to Be a Banker

Ch8, Race Against the Machine

Ch9, Beyond the Gates of the Land of Plenty

Ch10, How Ideas Change the World

This entry was posted in Book Notes, Social Progress. Bookmark the permalink.