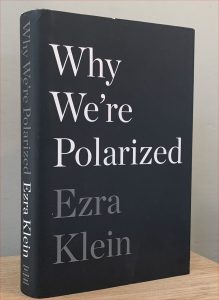 Ezra Klein’s Why We’re Polarized was published a full year ago, in January 2020. Ezra Klein is a co-founder of the ‘explainer’ website Vox, and writes essays and columns for various other outlets. (And he lives somewhere here in Oakland.)

The book is of course about the seemingly widening political divide in the US. Part of Klein’s theme is that the system is working as intended, so the polarization shouldn’t be much of a surprise.

To boil this down even further: America, unlike other countries, is especially divided because of its legacy of slavery and racism, because of the pace of change that is increasingly bringing non-white immigrants into the country, because of obsolete aspects of our political system, and because (this is what we do share with other countries) of modern social media that creates echo chambers of feedback.

The era that we often hold up as the golden age of American democracy was far less democratic, far less liberal, far less decent, than today. Trump’s most intemperate outbursts, his most offensive musings, pale before opinions that were mainstream in recent history. And the institutions of American politics today are a vast improvement on the regimes that ruled well within living memory. If we can do a bit better tomorrow, we will be doing much, much better than we have ever done before.

I always find it useful to ask myself what I expect of a book, what questions I want it to answer, what I suspect the answers might be, before I start reading. With this book my guess was: The bubble culture encouraged by web and social media, combined with groupthink, how people automatically assume the “beliefs” of those with whom they associate, i.e. community, congregation, political alignment. And what solutions might the offer? In this case, better education, critical thinking, respect for facts (and how would one do that?)? Also–why does this seem to be a problem especially in America? Social media is present around the world, and human psychology is the same everywhere too. (The answers are in the My Take paragraph above.)

Here, only somewhat condensed, are my detailed notes. [[ With some personal comments in brackets ]]

Ch3, Your Brain on Groups

Ch4, The Press Secretary in Your Mind

Summary so far in 2 pages.

Ch6, The Media Divide beyond Left-Right

Ch9, The Difference Between Democrats and Republicans

As things stand now, the system favors the minority, shrinking party of reactionaries against science and modernity, which will doom the US to irrelevancy on the world stage, and in particular the consequences of unaddressed climate change. *Eventually* they will fall from power as their base dies off. But that will take a generation or two.

Issues of abortion and “religious freedom” go virtually unmentioned here; issues some on the right are obsessed with are really not central to the problem at all.

This entry was posted in Book Notes, Politics, Psychology. Bookmark the permalink.