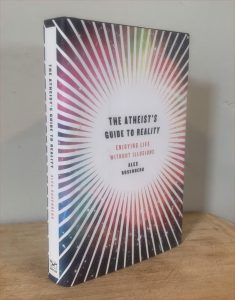 nother book I’ve had since it was published but only got around to reading this past year.

This is a book about taking reality at face value, and not imbuing it with magical thinking or illusions.

And this is a book, I’ll mention upfront, that I don’t agree with on all its points. It seems to me that Rosenberg makes the error of reductionism that other writers, like Sean Carroll and Frank Wilczek, avoid.

The title is a tad aggressive because most people react to the word atheist with distaste, if not disapproval. It’s also a problematic word because it’s defining one’s philosophical position with a negative, like saying one is not a stamp collector by calling oneself an a-stamp-collector. Still, there really isn’t a better word. Agnostic is milder and perhaps more honest, yet is a tad wishy-washy. After all, if the philosophical position here is about whether God or gods exist, can one know for certain, any more than (to use an example cited by Richard Dawkins that goes back to Bertrand Russell) we can be certain there is not a celestial teapot in orbit about Mars. So should we then carefully describe ourselves as teapot-agnostics? And similarly agnostic about every other possible outlandish claim? Or is it reasonable to conclude, based everything we’ve observed about the world around us, everything we know about the history of the human race, and so on, that the odds of there being a teapot in orbit around Mars is so vanishingly small as to be not worth considering? This is roughly how the atheist, or agnostic, thinks about the existence of gods.

Believers think they’re certain about the matter, yet fall back on “faith” when they can produce no evidence of any god or gods. Certainly the universe looks exactly like there is no one micromanaging it from the sky. Other words suggest themselves: rationalist, secular, humanist, freethinker, godless, skeptic. But each of these has a specific meaning distinct from any belief about god. A cute suggestion coined in 2003 and discussed in Daniel Dennett’s 2006 book BREAKING THE SPELL was “bright,” in analogy to the word “gay” for homosexual. But it never caught on, in part because of the negative connotation of the opposite, the implication that believers are “dim.” (More at this link: https://en.wikipedia.org/wiki/Brights_movement. )

So this book uses the term atheist unapologetically. The book is about 330 pages of text, and the author is a philosophy professor at Duke University in Durham, North Carolina.

The notes I took while reading are 6400 words long, so here I’ll condense, allowing expansion a bit for the conclusions at the end.

This entry was posted in Atheism, Book Notes, Science. Bookmark the permalink.