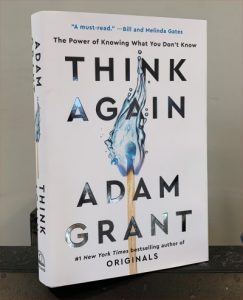 Adam Grant, THINK AGAIN: The Power of Knowing What You Don’t Know (2021)

This is a recent book, still on the bestseller lists, by an author I had not previously encountered. He’s a professor and TED talker. The book seems a little bit self-helpy, so I came to it guardedly. It seems to me that many self-help books identify a problem they claim you have, and then tell you how to fix it, to their advantage. Like that snake-oil salesman*.

At the same time, this book presents itself as one about “knowing what you don’t know,” which suggests to me the essence of science: being willing to update beliefs with new evidence, of acknowledging that what you think is true may not be true forever, about how to be a life-long learner.

So, given that I already understand how conclusions should be provisional and subject to new evidence, what else can this book tell me? This is what asked myself before I read it. (And the answer is: the distinction of roles in point #1 below. There also several points, below, that confirmed my existing principles and conclusions. Is this therefore an example of motivated reasoning, of simply reading to confirm my existing beliefs? Actually no; I didn’t realize what the book would be about, exactly, before I read it. That it confirmed much of what I’d already concluded suggests to me that there is a reality out there that, no matter from what direction you approach it, converges to the same place.)

I won’t summarize the entire book, though it is effectively written with many anecdotes and personal examples. The most striking one, the first of many, is how among a group of 1949 firefighters in Montana, one survived by, counterintuitively, using matches to burn a patch of grass, which he then lay on as the big fire passed over him. He was mentally fit; he had the ability to rethink and unlearn.

How the popular story about the frog in the pot of water… isn’t true. The frog jumps out as soon as the water gets uncomfortably warm.

This is a book that, as I didn’t notice before I started it, summarizes itself in the author’s “top thirty practical takeaways” (pp251-257). So I’ll summarize my own take-aways from among those points.

So, this is a book that seems self-helpy, but is as much one of the many books of the past couple decades that applies discoveries in psychology, of how the mind works, about discoveries of psychological biases and perceptual illusions. All of these are, in a crucial sense, the development of the idea to know thyself.

* And religions: did you not know that you’re a sinner??, said the missionaries to the Native Americans. We can fix you!