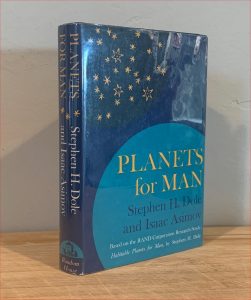 Here’s an older book co-written by Isaac Asimov, based on a RAND study by Stephen H. Dole, called PLANETS FOR MAN, from 1964. It’s about consolidating available knowledge as of the 1960s to assess how likely there are planets suitable for human habitation around nearby stars. I read this from the library back in 1970, and for some reason thought of it again recently. So I found a clean copy on Abebooks, and bought it.

And so Asimov assesses the requirements humans would have for a habitable planet (suitable gravity, light, and so on), then the actual properties of planets (mass, atmosphere, and so on) to assess what part of the entire ranges of those properties would match the human requirements. He comes up with a list of 10 factors and for each a probability a random planet would meet human requirements. (List on p168.) A final factor varies by the spectral class of the star (list p169), where only classes F2 to G1 are considered (outside that range stars are too old, or too young, for long-term evolution of life necessary to support human habitability).

The process is much like the famous Drake Equation (https://en.wikipedia.org/wiki/Drake_equation), which estimates the number of extraterrestrial civilizations that humanity might potentially communicate with (as in SETI novels like Gunn’s THE LISTENERS and Sagan’s CONTACT). But Dole’s study and this book aren’t concerned about alien civilizations, only with planets humans might colonize.

Now of course much of this book is surely dated. We must know more about these particular nearby stars than was known in the early 1960s. And we certainly know more about the existence of planetary systems around other stars via the Kepler space telescope (https://en.wikipedia.org/wiki/Kepler_space_telescope) that operated for about a decade beginning in 2009. Kepler found an amazing number of planetary systems, with a significant finding that most of them were not arranged as ours is, with small rocky planets closer to their sun, and large gaseous giants farther away. (Asimov assumes this will be true in general, based only on our own system and some reasoning about how the planets formed in the first place.)

Still, there’s a significant take-away from this book that has not diminished over time. And that is, even given a potentially habitable planet, how many things can “go wrong” to make it unsuitable for human habitation. The early chapters explore the consequences of the planetary mass being too high or too low, or why an extreme equatorial inclination would be prolematic. These are the factors listed on p168. I’ll list them with Asimov’s assessed probabilities of suitability for human habitation:

So while there are thousands and millions of stars out there, only a small number are likely to have planets that humans might colonize. As true now as ever.

This entry was posted in Book Notes, Isaac Asimov, Science. Bookmark the permalink.