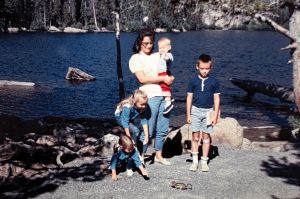 As I’ve mentioned recently, I am doing a final pass on scanning and photographing slides and photographs of my father’s, mostly of early family history including some from before I was born. (And will be catching up on some of my own photos soon.) I’ve done a couple passes over the past five years, with essays and many photos already posted on this site, under the Family History menu option above.

I found an app for iPhone — in fact I think I saw an ad for it on Facebook, which would be a first, since I don’t think I’ve ever before bought anything via an ad on Fb — called SlideScan, which allows you to photograph a slide with your iPhone, with the slide held up against a background light source. Works pretty well, though you need to figure out how to hold either the slide and/or the iPhone in such a steady way that you can also click the app’s camera button. After a couple experiments, I settled on using my father’s old slide sorter and viewer (a plastic tray holding slides, with a light bulb behind for back-lighting), shown here: 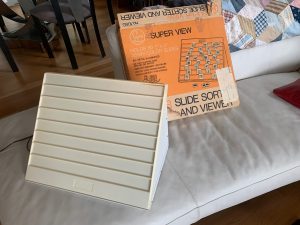 I began with a puzzle I noticed a few weeks ago when I gathered together all the unscanned/unphotographed slides. This was about a small yellow box, the standard box you would get a small film roll of 16 slides in back from the Kodak film developer, with “Glacier Bay trip July ’65” written on it. 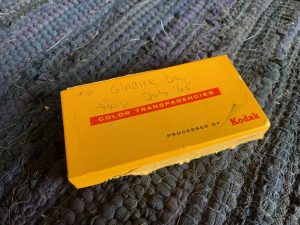 Inside were eight slides, several of my siblings around then, or perhaps a bit later, and two showing what was obviously a family trip, one with a lake behind (shown above), one on a snowy hillside (shown below). Both show me, at age 9, not quite 10, my sisters Sue and Lisa, and my younger brother Kevin, at age 1 or 2.

1965? What trip was this? I’ve already identified and discussed the big family vacations — mostly road trips — that we took when I was growing up, in my Family History pages on this site. See this page, 1/3 of the way down.

Anyway, where is Glacier Bay? Why, obviously, in Alaska! Where else? Search Google, no other Glacier Bay shows up.

But I’m as certain as I can be that my family never went to Glacier Bay in Alaska in 1965. That would have been a week’s drive (from LA). We’d never been anywhere in between, not northern California, Oregon, Washington, western Canada, before; why would we have driven through all of them to get to Alaska? Nor would we have flown. This was the 1960s. We never flew anywhere. It wasn’t within the realm of middle class families. (The first time I flew, aside from the trip home from England when I was an infant, was in 1979.)

So then I thought about the trips we did take.

There was the 1959 train trip, California to Illinois and back. There was the 1965 car trip, through Arizona and New Mexico and Texas (that one state took all day); returning through Colorado and Utah, again California to Illinois and back. Later vacation trips, when we were living in Illinois, involved a trip into Wisconsin and northern Michigan, in 1968; a 1969 trip (just after Apollo 11) through the Smoky Mountains, to DC, and into Canada; and two weeks in Rocky Mountain Park and then South Dakota, in 1970.

So… a bit of targeted Google Map searching found a small “Glacier Lake” south of Rocky Mountain Park, in Colorado. Here’s a map. The lake is so small it doesn’t show up at this scale, just the position marker. 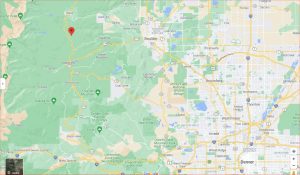 (Update a few days later: Obviously Glacier Lake isn’t the same as Glacier Bay, but the latter is what is written on the yellow box.)

Here’s what I think happened. On that 1965 car trip, we returned through Colorado, but not through Rocky Mountain Park. In 1965 we only went through Colorado on the way to visit (my father’s) Aunt Maude and Uncle Edwin, then living in Glenwood Springs; we wouldn’t have detoured north through the park. But we *did* detour north of Denver, just west of Boulder, as shown on this Google Map, just far enough to find a mountain lake, and some snow. It was only five years later that my father made a point of visiting Rocky Mountain Park, for a whole week.

From 1965, there’s just one more slide, here. I’m on the left, with my knees and socks looking exactly the same as in the lake photo. Then, Kevin, Lisa, and Sue. A mystery remains: what happened to all the other photos my father must have taken on this trip, and for that matter, during the 1970 trip? Perhaps Sue has them. (Of course many mysteries remain in sorting through old family photos. Who are *those* people? Where were my parents *here*? But at least I think I’ve solved one.) 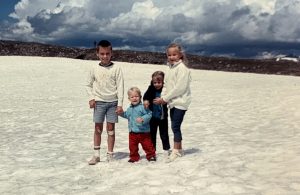 My father loved the mountains, and the wilderness, and on this 1965 trip that was the closest we got to them.

This entry was posted in Family History, Personal history. Bookmark the permalink.