This was Wilson’s second to the last original book, and it’s quite short, perhaps simply a long essay; 125 pages divided into 7 chapters with illustrations and blank pages in between; many references, and an index. 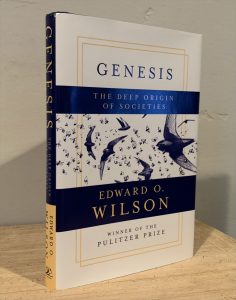 1, The Search for Genesis

2, The Great Transitions of Evolution

3, The Great Transitions Dilemma and How It Was Solved

4, Tracking Social Evolution Through the Ages

5, The Final Steps to Eusociality

The book rather abruptly stops; there is no summary or wrap up, as if the author decided he’d made his point and had no need to belabor it. The book has some nice line drawings by Debby Cotter Kaspari.