E.O. Wilson’s THE SOCIAL CONQUEST OF EARTH, from 2012, is in my estimation one of the four most significant books by this scientist and writer. (The others are ON HUMAN NATURE, 1978; CONSILIENCE, 1998; and THE MEANING OF HUMAN EXISTENCE, 2014.) And it’s the one book to read before all the others, for two reasons: It summarizes his thinking in many different areas (as explored separately in other books), and it refines and expands on his core ideas that began in ON HUMAN NATURE (and before), which is to say, a book like OHN is in a sense an earlier version of this book, and comparing them directly would show how a scientist’s ideas mature and grow. 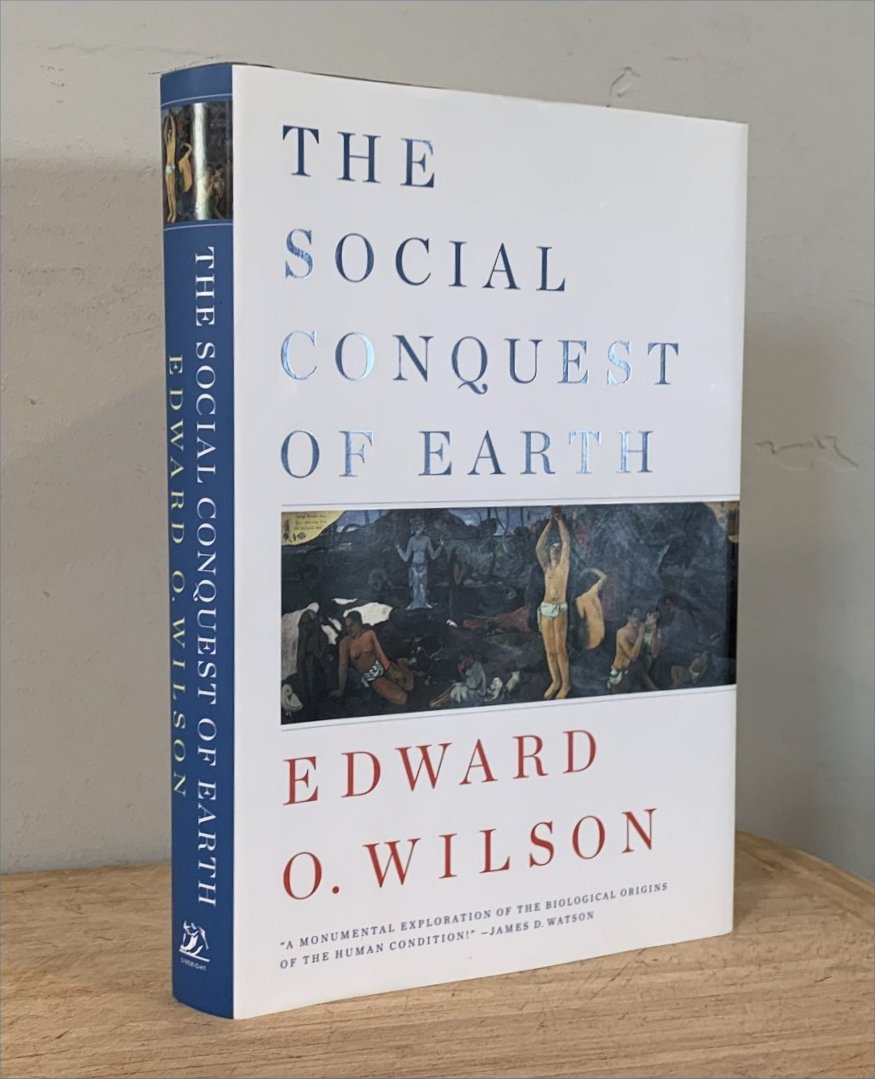 It’s been instructive reviewing my notes on this book after having done so for two of his later books, just posted about: THE ORIGINS OF CREATIVITY, 2017, and GENESIS, 2019. Because each of those books is a closer examine of a particular theme that gets one chapter in SOCIAL CONQUEST, with a few details added, but nothing substantially new. The author’s last “major” book, MEANING OF HUMAN EXISTENCE, covers ideas from SOCIAL CONQUEST in broader contexts and less detail (his books had begun to get thinner).

Further, SOCIAL CONQUEST is probably the best single volume by anyone (I can think of) that summarizes the latest thinking about human evolution. It has everything: Morality! Creativity! Individual and group selection! Tribalism! Religion! Theory of mind! Colors!

And except for Steven Pinker, there are probably as many beautiful quotes of prose by Wilson as by any science writer around.

Summary [[ with comments in double brackets ]]

I, Why Does Advanced Social Life Exist?

2, The Two Paths to Conquest

7, Tribalism is a fundamental human trait

11, The Sprint to Civilization

“While there, I was struck by the degree to which everyone seemed so different yet so familiar at the same time. Despite dramatic differences in cultural customs and practices, the Burkinabe people seemed to fall in love, hate their neighbors, and care for their children in much the same way, and for many of the same reasons, as people in other parts of the world…”

12, The Invention of Eusociality

13, Inventions that Advanced the Social Insects

IV, The Forces of Social Evolution

14, The Scientific Dilemma of Rarity

18, The Forces of Social Evolution

“The old paradigm of social evolution, grown venerable after four decades, has thus failed. Its line of reasoning, from kin selection as the process, to the Hamilton inequality condition for cooperation, and then to inclusive fitness as the Darwinian status of colony members, does not work. Kin selection, if it occurs at all in animals, must be a weak form of selection that occurs only in special conditions easily violated. As the object of general theory, inclusive fitness is a phantom mathematical construction that cannot be fixed in any manner that conveys realistic biological meaning. …”

19, The Emergence of a New Theory of Eusociality

Perhaps most people, including many scholars, would like to keep human nature at least partly in the dark. It is the monster in the fever swamp of public discourse. Its perception is distorted by idiosyncratic personal self-regard and expectation. Economists have by and large steered around it, while philosophers bold enough to search for it have always lost their way. Theologians tend to give up, attributing it in different parts to God and the devil. Political ideologues ranging from anarchists to fascists have defined it to their selfish advantage.

Human nature is the inherited regularities of mental development common to our species. They are the “epigenetic rules,” which evolved by the interaction of genetic and cultural evolution that occurred over a long period in deep prehistory. These rules are the genetic biases in the way our senses perceive the world, the symbolic coding by which we represent the world, the options we automatically open to ourselves, and the responses we find easiest and most rewarding to make.

We are attracted through prepared learning to find beauty in a stream-crossed parkland, and counterprepared to do the same for the interior of dark forests. Such responses seem “natural” to us, even though they must be learned, and that is precisely the point.

“They existed in what must have seemed to them to be the center of the world and the center of time. They lived as though Mobile as it was then would never change by much. Everything mattered, every detail, at least for a while. Somehow, in one form or another everything collectively remembered was important to someone. Now these people are all gone.”

22, The Origins of Language

23, The Evolution of Cultural Variation

24, The Origins of Morality and Honor

To see human nature as the product of this evolutionary trajectory is to unlock the ultimate causes of our sensations and thought. To put together both proximate and ultimate causes is the key to self-understanding, the means to see ourselves as we truly are and then to explore outside the box.

“The naturalistic understanding of morality does not lead to absolute precepts and sure judgements, but instead warns against basing them blindly on religious and ideological dogmas. When such precepts are misguided, which is often, it is usually because they are based on ignorance.”

25, The Origins of Religion

26, The Origins of the Creative Arts

VI, Where Are We Going?

It would be fair to mention that many evolutionary biologists think that Wilson “jumped the shark” to some extent with his ideas of multi-level selection and group selection. The brief summary of this book on Wikipedia hints at this, and Jerry Coyne said as much in his post about Wilson’s death.