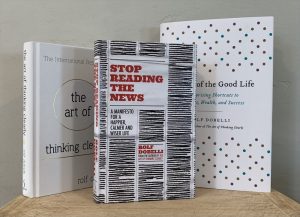 This is a short book on an idea that seems counter-intuitive. But I love counter-intuitive ideas, those that challenge my provisional conclusions about the world, especially if a book on such an idea can make its point succinctly without demanding too much of my time. If I’m wrong about something, I want to know. This one fits: it’s 160 pages of 35 short chapters with blank pages in between them.

I encountered Dobelli a couple years ago, when I learned he’d written a book called THE ART OF THINKING CLEARLY (2013), that explores many of the now-familiar cognitive biases that all humans are subject to. That book was a bestseller in Europe, where he lives and writes, though apparently he’s not well-known in the US. I’ve been fascinated by the theme of cognitive biases for 20 years now, and so I bought the book, to see what new angle or insights Dobelli might have. I glanced through it, and my take is that he describes many every-day situations in which we might reach a wrong conclusion, and then explains why we do so, in terms of the biases. Not, in contrast to many other books, by framing the narrative by the biases, and then showing examples; he shows examples first. I might read through the rest of the book, or maybe not. Too many books.

He also wrote, in a very similar structure, THE ART OF THE GOOD LIFE (2017), with 52 chapters across 210 pages. I’ve barely glanced through this, but will look at it again more closely.

His third book (which Amazon alerted me to since I’d bought the others) was STOP READING THE NEWS, subtitled “A Manifesto for a Happier, Calmer and Wiser Life,” published in 2019 and 2020, as indicated above. Really? I thought. Why?

It’s a smaller book than his first two. 35 chapters over 146 pages, not counting appendix and notes.

Other particular points from his book:

I’ll follow up some time about my own news reading habits, and how they’ve changed over time. (I already discussed Watching the News, on 28 February.)

We both know we ain’t kids no more. This has been my earworm for the past couple days.

Adele – Send My Love (To Your New Lover)

This entry was posted in Book Notes, Music, Psychology. Bookmark the permalink.