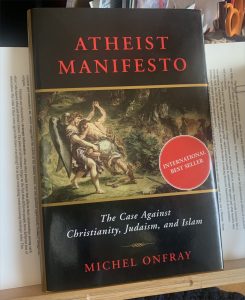 This book was published in French in 2005, and in English in 2007, this edition from Arcade Publishing.

This book is by an author discussed in the Stephen Prothero book as being one of the “angry New Atheists” along with American and British writers Harris, Dawkins, Dennett, and Hitchens. I had heard of it before, and in fact I bought a copy in 2007 from Amazon shortly after it came out, but it’s not nearly well known in the US as the books by those others, and I had not read it until just last month. Onfray, per Wikipedia, is a prolific writer of books on many topics, though only a handful have been translated into English.

Ironically, Prothero claims Onfray is the best writer among the five, though I can’t agree — perhaps a sign of the deeper differences between what Prothero thinks are important and what I do. Onfray strikes me as extremely well-educated; he can detail historical references at the drop of a hat, and like Prothero can do so in excruciating detail; but unlike those by the famous four, his book is haphazardly organized, consisting of many short chapter sections, each pursuing one particular thought, as if the author had his main chapters in mind but otherwise made up the sections as he went along.

Further, as the subtitle states, the book is a manifesto against the three major Western religions, and deconstructs them historically, ethically, and rationally. While only indirectly, and incompletely, arguing for atheism. It’s an excluded middle situation; maybe *other* religions are true. For a “manifesto,” or paean, to accepting the universe as it is, without the incoherent filtering of religion, read the books of Carl Sagan.

Ch1, Odyssey of the Freethinkers

Ch II, Atheism and the Escape from Nihilism, p27

Ch III, Toward an Atheology, p41

Ch I, The Tyranny of Afterlives