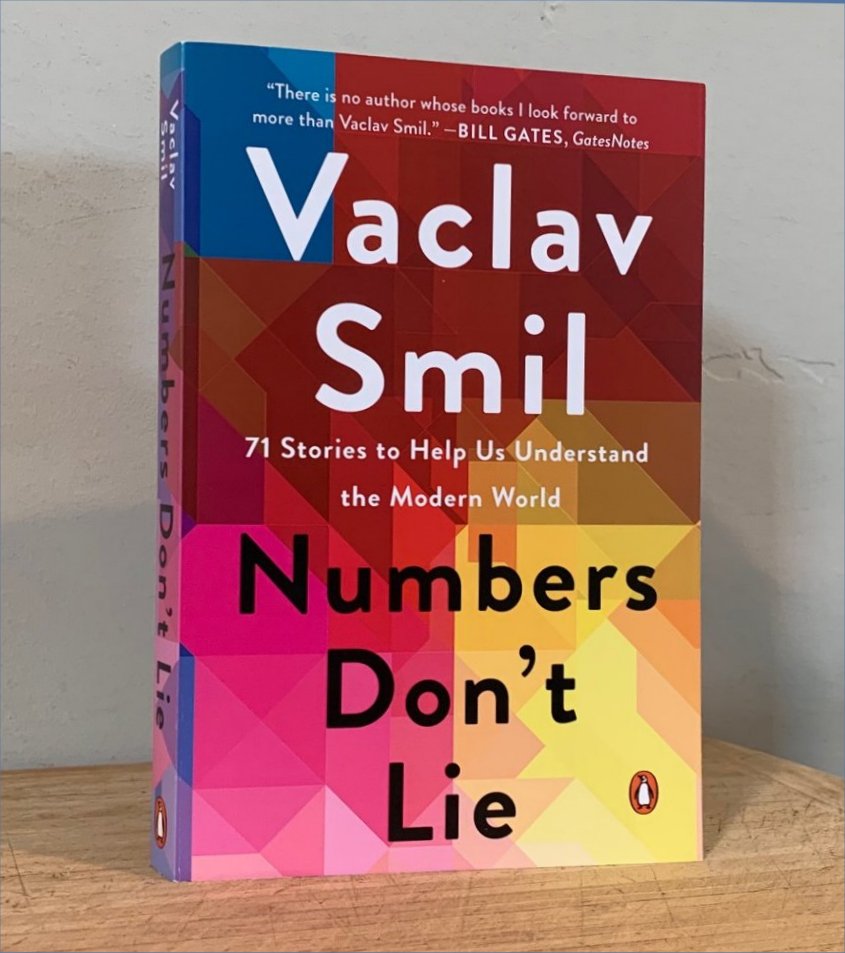 This is a 2020 book by a writer I had never heard of, until reading a pre-publication review in PW of his 2022 book How the World Really Works, which was just published in May. Smil is something of a polymath, author of over 40 books on history, energy, public policy, etc., including tomes like Energy and Civilization: A History (2018) and Grand Transitions: How the Modern World Was Made (2021). Big picture stuff, the sort of books I like, though I’ll wait to read his new one before ordering any others.

The book at hand has a paperback design to match the design of the new hardcover book. It has blurbs by Steven Pinker and Bill Gates, so what’s not to like?

Still, I can provide only a limited recommendation for the book. Basically it’s a collection of 71 (the subtitle is “71 Stories to Help Us Understand the Modern World”) short monthly essays written for the magazine IEEE Spectrum, and so the book has a limited unification, even though the essays are grouped into broad themes: People; Countries; Machines, Designs, Devices; Fuels and Electricity; Transport; Food; and Environment. It’s a sampler box. One can glean some interesting factoids, which I’ll list below.

But there are a couple very significant take-aways. First is the importance of quantification, getting a handle on the numbers of a situation to understand or make decisions, rather than relying on past experience or gut intuition. Secondarily is taking care to compare numbers that are comparable, which means,

For example, French GDP in 2010 was US $2.6 trillion: was that value in current or constant monies, and was the conversion from euros to dollars done using the prevailing exchange rate or purchasing power parity? And how would you know?

This is from the first page of the introduction. Similarly: numbers must be set in historical and international contexts; many examples.

The major take-away I think is the author’s care in sourcing his data. Again, from the introduction:

Nearly all the numbers in this book are taken from four kinds of primary sources: worldwide statistics published by global organizations, yearbooks issued by national institutions, historical statistics compiled by national agencies, and papers in scientific journals.

With footnotes giving examples of each of the four kinds.

He does not mention the internet. He does mention he doesn’t own a cellphone.

Without trying to summarize the entire book, here are some insightful take-aways from the individual essays. I should mention that these are not debunking essays; these are not revelations of counter-intuitive facts; these are about trying to pin down, with numbers, common issues and concerns.

This is only a sample. A recurring theme is that, everywhere,  in our infrastructure, we use fossil fuels. Getting off fossil fuels will not be as simple as the environmental advocates’ best proposals assume.

Author’s final advice: Even reliable numbers need to be seen in wider contexts. Ranking can be misleading. As is unnecessary precision. Caution and questioning are in order. But so is quantifying the realities of the modern world.

This entry was posted in Book Notes, Culture, Technology. Bookmark the permalink.