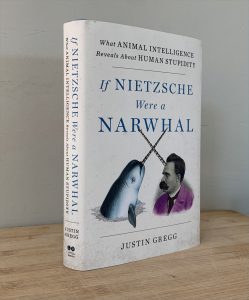 Picking up from where I left off yesterday.

My basic summary of this book is: humans are not “stupid”; the issue is that human intelligence has both good and bad consequences, and apparently we can’t have the good without the bad. The bad is that humans don’t anticipate long-term consequences, such as climate change, and the issue is whether humanity can overcome short-term thinking to save itself. Yet the overall theme is that animals have intelligence, and consciousness, in their own way; and humans are not necessarily ‘happier’ than any of them. And many animals may long outlast the human species.

I especially appreciate the term “prognostic myopia” as one example of how humans are comfortable thinking in the short term – perhaps a couple decades, the time it takes children to mature – but not think long-term. And how maybe this is the solution to Fermi’s Paradox.

This entry was posted in Book Notes, Evolution, Morality. Bookmark the permalink.