Which Books to Read, Dumb Politicians, Politics as a Joke

How do I choose which books to buy, or read? A case example. Also: about dumb politicians, and about politics as a joke. 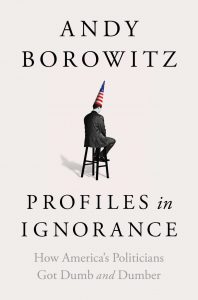 A few times here I’ve discussed my methods and thought processes to identify which books to read, or in particular which new books to buy with an eye toward reading. Here’s another chapter. Never minding the thousands of books that I own, and the several dozen from recent years that I definitely intend to read but have not yet, there are more new books that come out each year than I have time to read. Well, maybe I could read all of them if I started from scratch and *only* read new books.

There are different thought processes for different kinds of books. For novels, for example, reading one does not preclude reading any other, any more than seeing one movie rules out another, hours in the day aside. In contrast, nonfiction books might seems redundant after a point, for those on similar topics. Everyone has their favorite topics, subjects of interest, but do you need to read every basic book about cosmology or evolution that comes along? Only those by experts in the field? Only those that claim some new perspective or detail some recent discovery?

In reason years I’ve been fascinated by human psychology, to the extent it involves mental biases and errors of thinking, but as new books on the subject continue to come out, do I need to keep reading them? How to I pick which ones? Just in the past few weeks there have been several…

A related issue is American politics, in particular how one side is increasingly given over to ignorance and self-righteousness, authoritarianism and religiosity, and so many in the American public seem bamboozled by them to the point where democracy may be collapsing under the weight of conspiracy theories and paranoid fake news. I read a batch of books on this general topic three or four years ago, books by Lilla and Gladstone and Keen and Levitin and Levitan and Nicols and Kakutani… all duly summarized on this blog and listed on my nonfiction page. I have a batch more to get to, books that seem genuinely worthwhile, not just reiterations of the same themes: books by O’Connor & Weatherall, Nichols, Rauch, Gopnik, Lukianoff & Haidt.

Yet another book possibly related to this group, if apparently more humorous and in-your-face, noticed on one of my daily morning sites. It’s by comedian and New Yorker writer Andy Borowitz and is called Profiles in Ignorance, subtitled “How America’s Politicians Got Dumb and Dumber”.

So I checked it out. The description of the book begins:

Andy Borowitz, “one of the funniest people in America” (CBS Sunday Morning), brilliantly examines the intellectual deterioration of American politics, from Ronald Reagan to Dan Quayle, from George W. Bush to Sarah Palin, to its apotheosis in Donald J. Trump.

Wait, is this a book only about Republicans? (Easy to believe it could be.) I checked the “Look Inside” feature of Amazon and skimmed the Introduction. Finally, on page 10, the author offers some “exceptions that prove the rule” of Democrats that have “done a lot of dumb crap.” Smoking crack, trying to sell a Senate seat, four who engaged in sexual dalliances. But, “Once Democrats gin up a two-trillion-dollar war to find nonexistent weapaons of mass destruction, ignore and then politicize a virus that causes nearly a million needless deaths, and attempt a violent overthrow of the U.S. government, I’ll get cracking on a book about them.”

So there should be plenty of evidence here that both parties are not, as some accuse, just as bad as each other.

But, do I need to read this book? I’ve known that many Republican politicians are dim-witted for decades. It’s been obvious since Reagan. A couple years ago I did this post about my recollections of seeing Ronald Reagan, in person, at an event in 1980. A key passage:

Reagan is running very popular; current polls place him somewhat above the incumbent. What people see in him, I’m not sure: easy answers, I suppose, naively thinking, as Reagan apparently does, that they exist. Lately Reagan has spiced the campaign with a series of ignorant, even idiotic remarks: such as the assertion several weeks ago that Darwin’s theory of evolution was still only a theory, disputed by many scientists [[ it wasn’t disputed then, and it isn’t now, and why bring this up at all except to pander to a religious base that rejects science for religious myth? ]]; and most recently, that the EPA, Environmental Protection Agency, has become too restrictive because, after all, smog is pretty well under control.
…
He attacked Carter’s record. He promised to lower taxes, balance the federal budget, and increase defense spending, all at once. He promised that his reign would bring security back to wage-earners, the family, and traditional American values, particularly with the guidance of God. (Does it matter that some politicians defy the Constitutional separation of church and state in their rhetoric — by implying a preference for the Christian religions? Not to Republicans.) He spoke for all of ten to fifteen minutes, then was quickly escorted behind the stage to his waiting limousine. He didn’t take questions (as Jimmy Carter had, when I saw him several years ago at UCLA.)

At the same time, Slate took the book down last week: Andy Borowitz Is Not Equal to the Moment, subtitled “The New Yorker’s lukewarm satirist in chief thinks it matters if Republicans are dumb. He’s stuck in a bygone era.”

The point here being that Republicans being dumb is the least of it, these days. With examples of Republicans not being just dumb, but of trolling, saying outrageous things just to get rises out of the lib’s, or to follow Steve Bannon’s famous advice. Confuse them, so they don’t know what to believe. Some people will believe whatever you want them to believe. They’ve moved from being dim, to being malicious, in an Orwellian way.

These issues align with the question I’ve always wondered about Republicans who vote for these politicians– Is that the best they can do? Why do they think that celebrities and other dimwits are the best people to become politicians? I could easily speculate….

Final thought for tonight, that aligns closely with the above topic, from an item I posted three days ago here.

Beyond what I quoted then is much much more. Which aligns with the trolling theme of the previous piece. And perhaps explains why, as I’ve long thought, conservatives/Republicans don’t mind telling untruths.

And it’s gone back decades, just as Borowitz says about a slightly different issue.