Andy Borowitz, PROFILES IN IGNORANCE: How America’s Politicians Got Dumb and Dumber (2022) 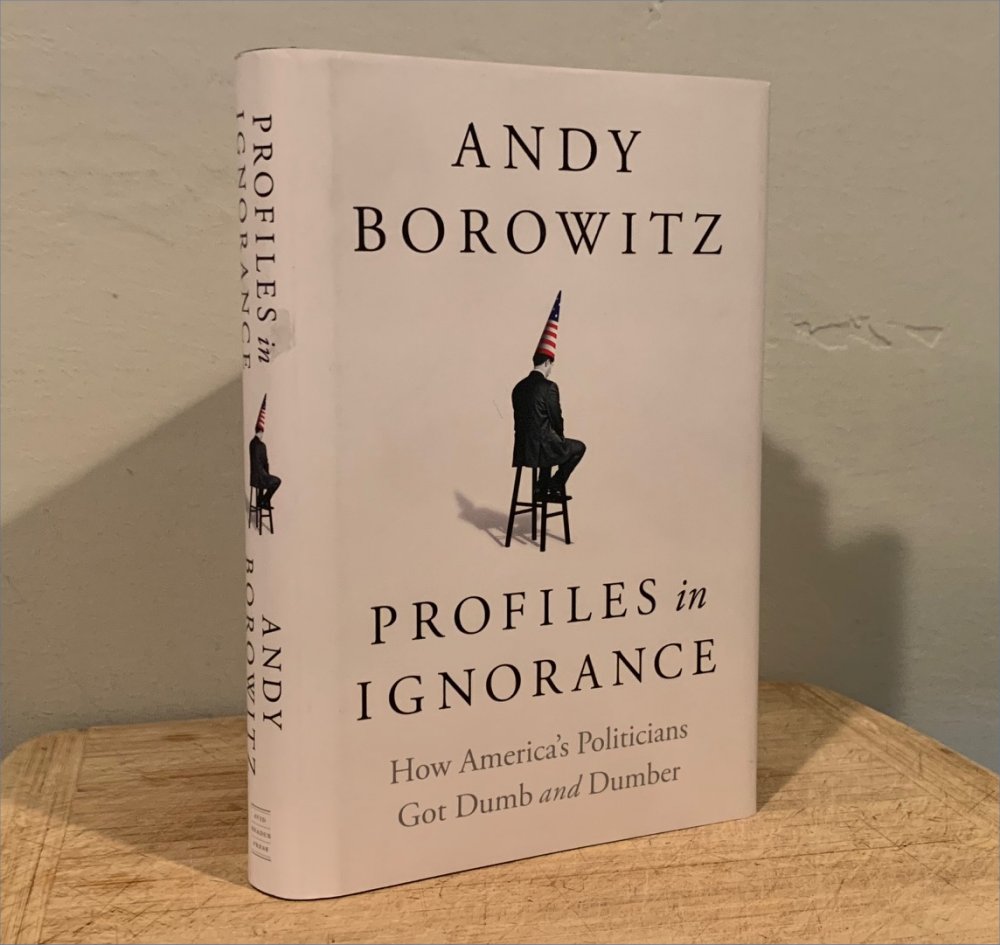 I hesitated reading this book, because I’ve seen and heard for myself over the years the vacuous platitudes of Ronald Reagan, the jejune idiocies of Dan Quayle, the conspiratorial lies of Donald Trump. So what would be gained by reading it…?

Well, to review a compilation of evidence about how consistently Republican presidents (and others) have been dim if not aggressively uninformed — and the book has almost 50 pages sourcing every statement cited through its 240 pages of text — but also to ask questions that I might expect the book to answer.

First, why do conservatives prefer dimwit candidates? Are those candidates, as I’ve wondered here before, the best they can do? Answer to that: no, that’s what they genuinely prefer. But why?

Second, is there anything to be done about it? Or third, does it even matter? Plenty of books have documented anti-intellectualism in American life, yet the nation is still here. More or less.

This post isn’t a detailed outline, let alone a full set of notes (I typed 3900 words of notes as I read the book), just some major points, with some comments about the author’s conclusion.

The author begins, roughly, with Reagan, and breaks American political history since then into three stages: Ridicule, Acceptance, and Celebration. Respectively: Reagan and Quayle; Bush and Palin; Trump and his wannabees. Wait, the book is only about Republicans? Page 10: “Haven’t Democrats done a lot of dumb crap? Yes, bucketloads.” Examples of smoking crack on tape, trying to sell a senate seat, various extramarital affairs. But “the scale of their destruction doesn’t equal that of their Republican counterparts.” When Democrats start needless wars, ignore a pandemic, and attempt a violent overthrow of the government, then the author will write a book about them.

Trump’s tactics on Jan. 6th go back to Trump’s father, and before: vandalism to get their way. 1970; 2000; 2016. And the unlikely hero of January 6th was… Quayle! Who gave advice to Mike Pence about following the law.

Reagan started it all with his talk of “government is the problem.” He and his successors never did nuance.

Borowitz ends with a conclusion called “Democracy’s Braking System,” in which he discusses what, if anything, can be done. Here, the book resonates with ideas I’ve been reading elsewhere, for years. First, would better education help? No, no evidence that would happen. (Remember: you can’t convince someone by explaining the facts.) Because our interaction with politics is irrational: even the best-educated are capable of voting like dopes. Example on the right: Tea Party; example on the left: that Russians changed votes in 2016.

My comment: No, wait right here. This is an example of both-sides-ism. Both sides are not equally bad. The worry on the left was that Trump was colluding with the Russians, not that anyone thought Russians had actually changed votes. My thought has always been that Trump and his team weren’t smart enough to manage such a conspiracy. But there’s been plenty of evidence of, for example, phony accounts posting misinformation on Facebook or Twitter that were based in Russia, and elsewhere. We just cited a Russian claim of such attempted interference a few days ago.

Back to Borowitz. Beware “political hobbyism,” treating politics like sports and just watching it go by. I supposed I’m guilty of this. Go to work at the local level, he advises. Obama was a community organizer! Consider “deep canvasing” (cue the recent McRaney). And realize that deep canvasing depends on personal stories, so recognize the power of stories, which provide our lives with meaning. (Stories trump reality; another theme endlessly explored here.) So does it come down to who has the best stories? Well, Obama’s rise was a great story, as was how election officials in 2020 defended their process despite Trump. One of the worst stories: Jan 6th. Author’s conclusion: it’s up to us. Be involved. We are the braking system, to keep democracy from plunging over the cliff.

So the basic lesson I take away from Borowitz’s take of the past 40 years of American politics: it’s not about conservative vs. liberal policies, so much as common man/dumbbell vs. intellectual/egghead.

One angle the book doesn’t explore: are there similar patterns in other countries? We know authoritarianism and election denial have spread, e.g. to Brazil, but have we known about embarrassingly dumb candidates and office holders in other countries, the way the whole world knew about Quayle and Palin and know about Trump? My suspicion is that this is a peculiarly American thing, born of the country’s expanse and the tension between rural and urban voters.

Similarly, belief in conspiracy theories isn’t quite the same as voting for stupid candidates. Something else is going on here, e.g. the insistence by conservatives of “owning the libs.” Resentment by rural people for urban people. I’ll keep thinking about this. It can’t be quite as simple as that.

This entry was posted in Book Notes, Politics. Bookmark the permalink.