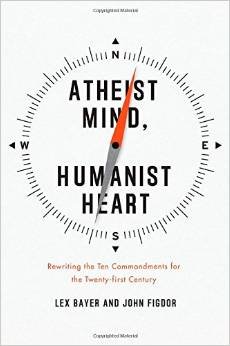 I started this book before the holidays, but what with the holidays and since then attention to the buying of one house and the selling of another, only just finished it a couple days ago, though it’s rather short. This is the latest attempt, of quite a few in recent years, to take a more rational, reality-based approach the idea of establishing principles for living, to replace the antiquated, tribal, religious rules, or ‘commandments’, enshrined in religious texts.

Or to approach it another way, this is a book, like Phil Zuckerman’s Living the Secular Life, which I reviewed here, that explores not why it’s not reasonable to believe in gods, but to explore how one characterizes morality and constructive principles for living, without the threats of divine punishment typically looming over the traditional commandments.

The authors of this book are two young guys, one a Silicon Valley CEO who studied religion at Stanford, the other a humanist chaplain at Stanford with a divinity degree from Harvard. They both look about 25.

Their approach is philosophical, even mathematical, in its initial question, How can I justify any of my beliefs?, and in their start with an initial set of ‘assumptions’, like mathematical postulates, that they take as given, and from which they will derive further principles. (These assumptions are the first three; the full list is below.) A second characteristic of their approach is to call their conclusions *not* commandments, but rather non-commandments; rules or principles for living, but not any kind of divine laws.

They go on to explore the idea of the scientific method (the fourth non-commandment), and then how to draw conclusions about the unknown — Ockham’s razor, probabilities, and a thought experiment about being in a white room with a sphere apparently floating in the air, and being asked questions about your confidence about the explanation about that sphere. And then they address the various ideas about whether a god exists; if so, why should it be the Christian god; if so, is this God omniscient, omnipotent, and omni-benevolent? The lack of observable evidence for god; the various arguments for god, all of them lacking. And so the logical conclusion (the fifth non-commandment): There is no God.

From there the book turns from what is true about the world to how one should live one’s life. The basic observation is that people behave in ways to make themselves happy, in whatever ways they conceive happiness to be. (Even if happiness means killing others to appease their notion of a god, or sacrificing their present life for the presumed happiness of an afterlife.) They explore the idea of a single universal moral truth, and reject it.

And they come up with this definition of morality: “We act morally when the happiness of others makes us happy”. I like that definition quite a lot.

Their final non-commandment may be the most crucial: “All our beliefs are subject to change in the face of new evidence, including these”.

So here are their ten non-commandments for the twenty-first century:

The book has its own website, http://www.atheistmindhumanistheart.com/, from which the authors conducted a crowd-sourcing ‘ReThink’ prize in December to compile a second set of ‘ten commandments for the 21st century’, selected by a panel of judges from entries by anyone.

The page for this winners is annotated by explanation of why each item is justified.

Number 7 is of course our familiar Golden Rule, which as I’ve pointed out is a general formulation of half of the original Ten Commandmants.

At some point I will spend some time consolidating these and many others, at least as resource links on my blog, but for now let me summarize another very good set of alternative ten commanded, by Daylight Atheism blogger Adam Lee, at The New Ten Commandments.

All of these more comprehensive, mature, and respectable than the Biblical ten.