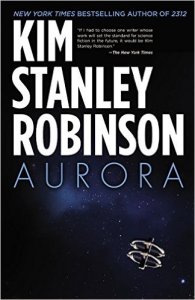 I began reading Kim Stanley Robinson’s AURORA on the Sunday before last, in the afternoon, and later that evening realized that I had the answer to an ‘elevator conversation’ question — actually a dinner conversation question with some in-laws — about who my favorite SF writer is. Kim Stanley Robinson. I don’t think there’s anyone who (of those writers currently active, I should disclaim) better combines the rigouressness of hard SF with the poetry of descriptions of the universe with effective fictional protocols of plot and character better than KSR.

Finished Kim Stanley Robinson’s AURORA today — an amazing book, for its scientific integrity and versatility and verisimilitude, for the familiar KSR passions of prose about geology and orbital mechanics and beaches, for its affecting characters, including a ship AI that ponders about narrative and decisions and consciousness and love; for its plot that keeps you guessing from chapter to chapter until the very end about what kind of book this is — where is it going?? — and ultimately for its reaching a conclusion that challenges standard science-fictional assumptions about… but to say any more would be to give away too much. It’s that last, challenging SF’s common assumptions, that makes this an important, and very worthwhile, book.

The book is about a generation starship sent from Earth to settle one or another of the planets around Tau Ceti, a trip that is taking some 170 years. The novel opens near the end of the trip, as the ship begins decelerating toward its destination. The characters are 14-year-old Freya, her father Badim, a mellow doctor, and her mother Devi, a brilliant ship’s engineer, always managing to fix problems throughout the ship, who is angry to some degree all the time. Over the course of the book, Freya remains the central character, as she ages several decades.

The ship reaches one of the planets around Tau Ceti, but subsequent events can’t be discussed without major spoilers. Let me just say that up until about page 150 the book seemed like it might be recapitualating the author’s Mars novels, i.e, relating the difficulties of settlers adjusting and/or terraforming a new planet. But plot happens, and keeps happening in unexpected ways all the way until the end of the novel, where it, as I suggested, reaches a conclusion about the whole plausibility of how mankind “cannot live in the cradle forever” — a famous quote the novel mocks — that challenges a central assumption of science fiction’s vision of mankind’s future in the universe beyond the Earth.

Along the way we have the author’s characteristic insights and details. My favorite, early in the book, concerns one of the couple dozen biomes, all modeled after various ecosystems of Earth, with native animals to preserve maximum biodiversity for the settling of a new planet. The whole population of the ship is only some 2100, with thus only a few hundred residents in each biome. In the biome modeled after Labrador, a tribe of yurt people raise their children without any knowledge they are actually on a ship — until puberty, when they undergo an initiation, put in a spacesuit, taken outside the ship blindfolded, and then shown the ship and the stars — an event some of them find traumatic, but a policy which many of them, nevertheless, endorse by staying in the tribe and raising their own children the same way. (p61-62) Wow.

Plot issues aside, there are several thematic ideas that pervade the novel:

“People have ideas. They live in their ideas, do you understand? And those ideas, whatever they heppen to be, make all the difference.”

“But there’s more than ideas,” she protests. “This world.” She gestures at the fading sunset. “It’s not just our ideas.”

“For some people it is. They don’t have anything else, maybe, so they give everything they have to ideas.”

This is a book about human ideas, or ideals, overtaken by the experience of the real world.