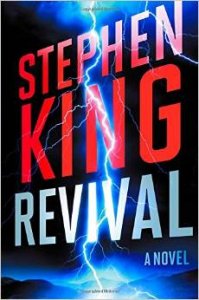 I enjoy Stephen King’s novels, but he writes too many of them (one or two every year) for me to keep up with all of them, and so I tend to get to only every third or fourth book, whenever the book’s theme appears at least vaguely science-fictional (the last one I read was 11/22/63), or some other aspect of the book seems interesting. I decided to read Revival because a key plot point — hardly a spoiler, it’s alluded to in the front flap description — involves a small-town minister’s ‘deconversion’ from faith following a family accident. I was curious how this would play out fictionally, since I’m always fascinated by how people (not just religious people) justify their beliefs or unbeliefs.

The story is narrated by Jamie Morton, beginning in 1962 when he’s 6 years old [and thus very close to my own age], and then forward across the decades to the present year. In 1962 Rev. Charles Jacobs, a new, young, minister comes to Jamie’s small Maine town of Harlow, with a beautiful wife and charming kid and a hobbiest obsession with electricity. A couple years later tragedy befalls, as alluded to, which leads to Jacobs’ delivery of what becomes known in town lore as the “Terrible Sermon”. Jacobs stands before his congregation and recites a litany of other senseless accidents (which challenge the idea of a loving, benevolent God) and then draws a series of conclusions (familiar to those of us who never found religious claims particularly plausible in the first place), e.g., he describes the many branches of Christianity — Catholics, Episcopalians, Methodists, Baptists, and on and on — and then says (p71m):

“Here in Harlow, w’ere all on party lines, and it seems to me that religion is the biggest party line of them all. Think how the lines to heaven must get jammed on Sunday mornings! And do you know what I find fascinating? Each and every church dedicated to Christ’s teaching thinks it’s the only one that actually has a private line to the Almighty. And good gosh, I haven’t even mentioned the Muslims, or the Jews, or the theosophists, or the Buddhists, or those who worship America itself just as fervently as, for eight or a dozen nightmare years, the Germans worshipped Hitler.”

Members of the congregation begin to walk out. Jamie, our narrator, narrates (p72.2):

My mother was sobbing audibly, but I didn’t look around at her. I couldn’t. I was frozen in place. By horror, yes, of course. I was only nine. But there was also a wild, inchoate exultation, a feeling that at last someone was telling me the exact unvarnished truth.

“But as I stood in the back room of Peabody’s [the funeral parlor] and looked down at the mangled remains of my boy, who wanted to go to Disneyland much more than he wanted to go to heaven, I had a revelation. Religion is the theological equivalent of a quick-buck insurance scam, where you pay in your premium year after year, and then, when you need the benefits you paid for so–pardon the pun–so religiously, you discovery the company that took your money does not, in fact, exist.”

“Just one more thing. We came from a mystery and it’s to a mystery we go. Maybe there’s something there, but I’m betting it’s not God as any church understands Him. Look at the babble of conflicting beliefs and you’ll know that. They cancel each other out and leave nothing. If you want the truth, a power greater than yourselves, look to the lightning — a billion volts in each strike, a hundred thousand amperes of current, and temperatures of fifty thousand degrees Fahrenheit. There’s a higher power in that, I grant you. But here, in this building? No. Believe what you want, but I tell you this: behind Saint Paul’s darkened glass, there is nothing but a lie.”

After which Jacobs walks out, and shortly the church deacons fire him, and Jacobs leaves town forever….almost. As the last-quoted passage suggests, the “Terrible Sermon” is a motivator for what Jacobs does over subsequent decades; the book isn’t about the validity of religious faith, it’s about the obsession of one person who’s lost his faith to pursue, via his obsession with electricity, a particular goal, and how his path, and the narrator Jamie’s path, come together again and again over the years.

Over those years, Jamie joins rock bands, becomes a druggie, encounters Jacobs and is cured of his addition to heroin via “secret electricity”, gets a job at a music studio in Colorado, attends a family reunion, and finds himself eventually drawn into Jacobs’ employ; Jacobs, meanwhile, uses his electrical apparatus (which he used to apparently cure Jamie’s brother of a lost voice, early on), goes from carnival sideshow event, to revival preacher who cures people’s ailments, with millions of followers, eventually to wealthy recluse back near Jamie’s hometown. And so the two characters come together at the end, with a Grand Guignol climax involving lightning strikes (see book cover) and Jacobs’ obsession with the fate — in light of his loss of faith — of his wife and son.

Here’s what I like about Stephen King books, no matter what the subject. King has an ironclad grip on American culture and its people: he understands how all kinds of people think and interact, as if he’s been everywhere and seen everything; he evokes times and places with specific references to places and product names in ways that underscore his authority as a storyteller [yet which might prove problematic for future readers who don’t recognize such references], again, as if he’s been there and done that. And there’s always a complexity to his characters with emotional repercussions. In this book, the protocols of small town life; a charming family reunion in which Jamie’s grand-niece takes to him; a heartbreaking coda concerning one of Jamie’s family members…

Let me quote a couple more passages. This one, p373m, out of context, by narrator Jamie:

At the heart of every established religion is one sacred mystery that supports belief and induces fidelity, even to the point of martyrdom. Did he [Jacobs] want to know what lay beyond death’s door? Yes. But what he wanted more — I believe this with all my heart — was to violate that mystery. To drag it into the light and hold it up, screaming Here it is! What all your crusades and murder in the name of God were for! Here it is, and how do you like it?

Another, p270m, in which Jamie has challenged Jacobs’ role as a faith healer. Jacobs says

“They don’t deserve the truth. You called them rubes, and how right you are. They have set aside what brains they have — and many of them have quite a lot — and put their faith in that gigantic and fraudulent insurance company called religion. It promises them an eternity of joy in the next life if they live according to the rules in this one, and many of them try, but even that’s not enough. When the pain comes, they want miracles. To them I’m nothing but a witch doctor who touches them with magic rings instead of shaking a bone rattle over them.”

To which narrator Jamie thinks,

My researches with Bree had convinced me that Fox Mulder was right about one thing: the truth is out there, and anyone in our current age, where almost everyone is living in a glass house, can find it with a computer and an Internet connection.

At the risk of closing this review on a discordant note, I appreciate this last sentiment. In one sense, it’s true: the internet provides information and knowledge on absolutely everything. But what King’s characters don’t note is that most people don’t care — at most they’re only interested in finding other like-minded ‘truths’ out there on the Internet that correspond with their own. This is a whole ‘nother subject.

So final note: Jacobs’ obsession with “secret electricity” is attributed to his research into various “forbidden books” by the Catholic Church, including especially De Vermis Mysteriis, “supposedly the bases of H.P. Lovecraft’s fictional grimoire, called The Necronomicon” (p336t). In the novel, Jamie verifies all this on Google. But of course, this is a novel; it’s fiction. Wikipedia: De Vermis Mysteriis was in fact the invention of author Robert Bloch, later best-known for the novel Psycho, basis for the Alfred Hitchcock film. But which did inspire H.P. Lovecraft.