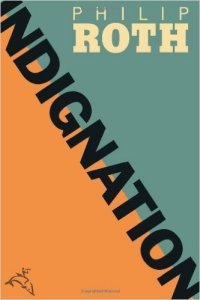 I saw the film Indignation a couple weeks ago, and here’s what I posted about it on Facebook:

—
We saw the film Indignation today, based on a short Philip Roth novel that I’ve not read. It’s about a Jewish boy from Newark who attends a conservative Christian college in Winesburg, Ohio, in 1951, to escape an overbearing father and the dangers of the Korean war. Being based on a novel, the story isn’t any kind of ordinary Hollywood melodrama or romance, and the tension until the end is whether this story will end happily, tragically, or in a mixture of both — much like life. And to contemplate the meaning the title. It’s the first film directed by James Schamus, well-known as a producer for dozens of films from The Ice Storm to Brokeback Mountain. The star, Logan Lerman, is excellent, and the story features a college dean played by Tracy Letts who is surely the most subtly sadistic authority figure in movies since Nurse Ratched. Recommended! If you see it, pay attention to the first two scenes; the story eventually circles around to explain their significance.
—

Since then I discovered I had a copy of this Philip Roth novel (in the overstock I’d put into the garage!), and read it last week. The film adaptation is very faithful to the extent of reproducing many scenes and dialogue exactly from the book. (And I commend actor Tracy Letts for his portrayal of that “subtly sadistic authority figure” — who is by the way a playwright) At the same time, the film version omits a couple themes (e.g. about one of Marc’s roommates being homosexual), and completely omits a key scene at the end of the novel, about an infamous “panty raid” at this Ohio university, triggered by a snowfall and snowball fight. And there is no epilogue about Olivia being in an old-folks’-home, as in the film.

And I appreciate the novel’s, and film’s, commitment to the character’s atheism; in both, he quotes passages from Bertrand Russell’s Why I Am Not a Christian, that dismisses the common arguments for the existence of a god. A book that was also very influential in my early life.

What the novel does that the film does not is… tell us that the narrator — SPOILER! — is already dead, and that he is somehow revisiting the memories of his life. In Roth’s novel there is an extraordinary passage beginning on page 54 (of a 233 page book):

And even dead, as I am and have been for I don’t know how long, I try to reconstruct the mores that reigned over that campus and to recapitulate the troubled efforts to elude those mores that fostered the series of mishaps ending in my death at the age of nineteen.
…
Is that what eternity is for, to muck over a lifetime’s minutiae? Who could have imagined that one would have forever to remember each moment of life down to its tiniest component? Or can it be that this is merely the afterlife that is mine, and as each life is unique, so too is each afterlife, each an imperishable fingerprint of an afterlife unlike anyline else’s?

I think the film transformed this theme very effectively — via those opening and closing shots I noted in my Fb post. I think this film should get nominations, in whatever awards apply, for effective translation of a source to a screenplay.

On final note… the book captures its title, “indignation”, in scenes in which the narrator resents the forced attendance to chapel, by singing to himself a Chinese anthem, and replacing a passage by that word.

This is the best kind of literary fiction. I’ve been deeply impressed by every Philip Roth novel I’ve read. Why hasn’t Philip Roth won a Nobel Prize?