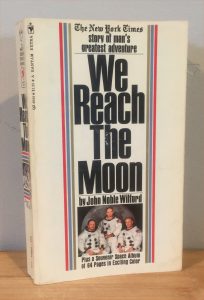 Like most others of my generation, I remember watching the Apollo 11 moon landing in grainy footage on a black & white TV in July 1969. I was not quite 14, and was living with my family in Glen Ellyn, Illinois, where we gathered around that TV set, and heard Neil Armstrong’s famous words.

I grew up with continuous news of the growing space program; the Mercury missions, the Gemini missions. There was a certain inevitability, perhaps the flavor of a manifest destiny, about the exploration of space and the expansion of mankind into the planets and the universe.

At the same time, on TV, there were early Twilight Zone episodes, like the very first, that presumed the inevitability of launches into space, Then, proceeding from the ridiculous to the sublime, there was Lost in Space, that assumed the need for colonizing other planets; and there was Star Trek, that showed the exploration of space far advanced, by a multi-cultural, multi-species, egalitarian society. And there was Kubrick’s film 2001: A Space Odyssey, just a year before Apollo 11, that depicted a grandiose space station and moon base.

So the success of Apollo 11 was gratifying, but not especially surprising. It was just the next step, in a long series expected to continue.

I have other distinct memories of July 1969. Just a week or two after the Apollo 11 landing, my family took a road trip east, from where we lived near Chicago. We drove through Smokey Mountains National Park. And then we stayed with a cousin of my mother’s and her family just outside Washington DC. We visited Dulles Airport, because my father was an architect and admired its design and wanted to see it. There, on a paperback rack, I bought a book called WE REACH THE MOON, by John Noble Wilford. It was what came to be called an ‘instant book,’ one written and published very quickly after the event it covered. (Just 72 hours after the event, the book claims; so obviously it was mostly written in advance, assuming the mission’s success.) It detailed the history of space flight until then, with 64 pages of color photos and appendices of past missions and transcripts of the Apollo 11 flight. Wilford still writes for the New York Times, so he must have been very young when he published that book. (I also recall, visiting those cousins, explaining 2001 to them, having both seen the movie and read the book. I’m not sure I succeeded.)

In later years I spent most of my career working for Rocketdyne, a rocket engine factory in the San Fernando Valley area of Los Angeles, supporting for many of those years first the Space Shuttle Main Engines and then the power system for the International Space Station. I was too young to support Apollo, and the Space Shuttle is long gone, but the Space Station persists. Though likely the systems and software I contributed to have long since been replaced by newer versions.