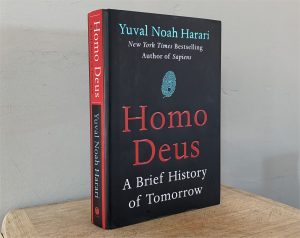 This is, in effect, a sequel to SAPIENS.

Again, note how frequently Harari rolls out concepts in groups of three. I’m still irritated of his use of the word religion to describe value systems that explicitly revoke traditional religion, e.g. secular humanism. He does so because he wants to identify those values with the analogous presumption about the world that religions make, so that he can challenge them and thus consider whether the western liberal project is doomed. There are lots of interesting ideas here, but I’m not as alarmed about the future as he seems to be. For example, does it matter if free will doesn’t exist in some fundamental sense? People still act as if they have free will. Perhaps it only matters if these intelligent algorithms he anticipates learn to manipulate us to what we think we are choosing freely is really chosen for us. But this already happens—we are guided in our tastes by culture; we are guided in our beliefs by our families and social groups.

He examines many of these same themes in this third big book, which I’ll cover next.

The book begins with a long, 70-page, prologue: “The New Human Agenda.” To some extent this recalls themes from SAPIENS, and to some extent it gives the impression that he forgot about another triad of ideas—or perhaps one cut for space—and is filling it in here. But no; reflecting on this book’s theme, instead what he’s doing is setting the stage, by explaining how several eternal trials of human existence have largely been overcome. Which leads to the book’s theme: what do we do now? But first, review those eternal trials.

[[ He may be right to the extent that, in the sense that humanism endorses continued expansion of the species, we’ll destroy the planet and thus ourselves. That’s why I’ve never been entirely happy with the idea of ‘humanism’ – what’s really needed is an *understanding* of our place on earth and in the universe, and the goal should be long-term sustainability, not continued expansion. (Which might subvert the SF fantasy of exploring and colonizing the universe.) And certainly the commandments of religions to keep reproducing and fill up the globe. ]]

Ch10, the Ocean of Consciousness