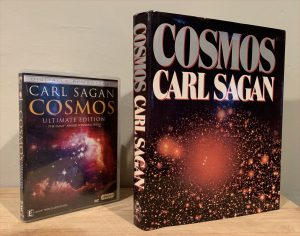 Cosmos may fairly be called one of the foundational books of my life (even moreso than Sagan’s earlier The Cosmic Connection, revisited here in 2015) even though I hadn’t read the entire book until this year. The book was a companion to a 13-part PBS TV series than ran in late 1980. In 1980 I was living in a one-room apartment with a tiny, maybe 15-inch, black and white TV, so even though I watched the show at the time, I saw it only in black and white. Recently, inspired perhaps by the latest of the Neil deGrasse Tyson-hosted Cosmos TV series (largely written by Anne Druyan, Sagan’s wife and cowriter back in 1980) that launched earlier this year. I discovered that all the episodes of the original series could be found on YouTube—though alas, several of them interrupted by commercials. So I sprung for the entire series on DVD (i.e. I bought it) and over a period of some months, beginning this past June, have watched the series (now seeing it in color!) and finally reading the book closely. I’m sure I’d glanced through the book back in 1980 (I got it as a Christmas gift that year) or early 1981, but likely didn’t feel the need to read it thoroughly, given its similarity to the TV series.

The show ran originally from September 28 – December 21, 1980, per Wikipedia, and the book was released in October 1980. So they were obviously developed in parallel. Indeed, some of the footage in the TV series, of Sagan at JPL as Voyager 2 pictures came in from Jupiter, was filmed back in 1979. 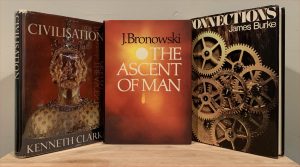 That a book about astronomy and cosmology should follow those, and become as popular than those, seemed to confirm to me the ascendance of real science into popular discourse. TV had had its pop sci-fi in Lost and Space and Star Trek, the movies its simplistic space opera of Star Wars, now here was PBS doling out the real thing about the history of science and our knowledge of the cosmos. To me it was a validation, of sorts, that ideas about humanity’s place in the vast universe were filtering down into public consciousness, perhaps brushing aside superstitious notions like astrology and general ignorance about the difference between planets, stars, and galaxies. Alas, decades later, this has not happened; ignorance about reality, and adherence to conspiracy theories, has only grown.

Of course I knew much about the subjects of Cosmos in general, my astronomy interest going back to 1965 or so (when I was 10). Yet Sagan made the subject personal, appearing on camera in segments alternating with graphics and animations, with historical recreations (using actors and local sets) of pivotal events in the history of science, and the notion of a “ship of the imagination,” a futuristic spaceship bridge, where Sagan would stand to allow the POV to sweep into the atmospheres of the planets or through distant galaxies.

The TV series did have one influence on me quite apart from the scientific content: the music. The show used electronic music by the Greek composer Vangelis, many tracks from numerous albums, which I then sought out. (Vangelis went on, in just the next couple years, to do original scores for movies like Chariots of Fire [for which he won as Oscar] and Blade Runner.) There were also tracks from classic music composers, in particular Shostakovich, whose 11th symphony, mostly the quiet sections of tense music, were used in several episodes. (I’d already heard some Shostakovich in the 1975 film Rollerball.)

As it turns out, the TV episodes and the book chapters of Cosmos are not precisely in synch, even though the titles are the same. The differences include…

Here are the most striking take-aways I had of the book and series:

So now I’ll summarize the subject  and main points of each chapter/episode, with some further comments about any key differences between the two. (Wikipedia’s page, https://en.wikipedia.org/wiki/Cosmos:_A_Personal_Voyage, has three or four-line descriptions of each episode.)

1, “The Shores of the Cosmic Ocean”

2, “One Voice in the Cosmic Fugue”

8, “Travels in Space and Time”

Ch11, “The Persistence of Memory”

The Cosmos was discovered only yesterday. For a million years it was clear to everyone that there were no other places than the Earth. Then in the last tenth of a percent of the lifetime of our species, in the instant between Aristarchus and ourselves, we reluctantly noticed that we were not the center and purpose of the Universe, but rather lived on a tiny and fragile world lost in immensity and eternity, drifting in a great cosmic ocean dotted here and there with a hundred billion galaxies and a billion trillion stars. We have bravely tested the water and have found the ocean to our liking, resonant with our nature. Something in us recognizes the Cosmos as home. We are made of stellar ash. Our origin and evolution have been tied to distant cosmic events. The exploration of the Cosmos is a voyage of self-discovery.

How pallid by comparison are the pretensions of superstition and pseudoscience; how important it is for us to pursue and understand science, that characteristically human behavior. …Those afraid of the universe as it really is, those who pretend to nonexistent knowledge and envision a Cosmos centered on human beings will prefer the fleeting comforts of superstition. They avoid rather that confront the world.

Present global culture is a kind of arrogant newcomer. It arrives on the planetary stage following four and a half billion years of other acts, and after looking about for a few thousand years declares itself in possession of eternal truths. But in a world that is changing as fast as our, this is a prescription for disaster. No nation, no religion, no economic system, no body of knowledge, is likely to have all the answer for our survival. There must be many social systems that would work far better than any now in existence. In the scientific tradition, our task is to find them.