Links and Comments: Trying to Be Smarter; Faith vs Fact

NYT: How Do We Get to Herd Immunity for Fake News?, subtitled, “We need to match our focus on the supply of misinformation with a focus on the demand for it.”

Yet the chorus of angst over misinformation has focused too sharply on the channels supplying it. The bigger problem is the public’s appetite for consuming it.

That demand has been evident recently in the fantastical beliefs of Mr. Trump’s most ardent supporters that not only did he win the presidential election, he also won by a landslide.…

Those who believe such claims, like others across the political spectrum, occupy an ecosystem of unreality that social media enables. But the bigger project is not to prevent lies. It is figuring out how to educate citizens so they are more resistant to them.
…
Another intellectual virtue is the ability to embrace nuance — the fact that most of life occupies a realm of opacity that is neither stark truth or fiction nor obvious right or wrong — without collapsing into nihilism. The rejection of nuance is perhaps the most compelling explanation for the rise of disinformation. In a Manichaean worldview that sees everything as wholly true or entirely false, a patina of plausibility leads to an extreme conclusion. A nuanced view of electoral fraud is that it occurs in isolated instances in every election, but that there is no evidence that it decided this one. A Manichaean view is that some electoral fraud — a Trump ballot in a dumpster, or a get-out-the-vote call to a dead person — proves that the whole election was fraudulent.

(This reflects my notions of hierarchies from the simple [black and white thinking] to the complex [nuanced and situational thinking].)

One method I recommend for insulating yourself from misinformation (fake news) is to be hygienic in one’s choices of news sources. Avoid junk news as you would avoid junk food — both are designed to appeal to basic instincts, but in large doses are very unhealthy.

Again, the Media Bias Chart, (at this link), latest version: 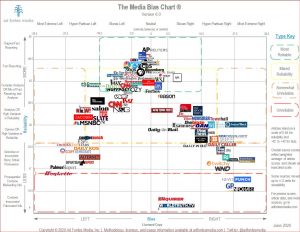 Pay attention to center top, and try not to be a victim of lower left or right.

The article cautions against a corrosive idea of “critical thinking.”

In a free society, the best response to viral misinformation is to fortify our immune systems against it, informationally speaking, by developing citizens who are motivated and able to distinguish truth from fiction. Perhaps more important, these citizens must be able to deal with the nuance in between.

In educational circles, this goes under the name “critical thinking.” The term’s foundations in criticism as careful analysis are noble. But critical thinking as taught today is often more criticism than thought, with criticism amounting to the parlor trick of deconstruction. Holes can always be poked in even the best arguments, but the technique is better at establishing what is fiction than what is true.

Don’t be cynical, as I’ve said, and think that everyone has ulterior movies for their arguments; learn about how the world works, and be savvy.

Trying to avoid contentious takes on Republicans in this post. Let’s go to the core of savvy thinking: understand that religions are fabulous cultural traditions, but at their core, their supernatural claims are merely myths. If you really believe any of those claims… [insert favorite miracle of supernatural claim here]… then you have already sacrificed your ability to think and evaluate the real world, to some degree.

University of Chicago scientist Jerry Coyne wrote a whole book about the difference between faith and fact, and this past week he’s summarized his argument posted at Yahoo News, Yes, there is a war between science and religion. The opening (keeping all the internal CSS tags):

As the West becomes more and more secular, and the discoveries of evolutionary biology and cosmology shrink the boundaries of faith, the claims that science and religion are compatible grow louder. If you’re a believer who doesn’t want to seem anti-science, what can you do? You must argue that your faith – or any faith – is perfectly compatible with science.

And so one sees claim after claim from believers, religious scientists, prestigious science organizations and even atheists asserting not only that science and religion are compatible, but also that they can actually help each other. This claim is called “accommodationism.”

But I argue that this is misguided: that science and religion are not only in conflict – even at “war” – but also represent incompatible ways of viewing the world.

And while science has had success after success in understanding the universe, the “method” of using faith has led to no proof of the divine. How many gods are there? What are their natures and moral creeds? Is there an afterlife? Why is there moral and physical evil? There is no one answer to any of these questions. All is mystery, for all rests on faith.

The “war” between science and religion, then, is a conflict about whether you have good reasons for believing what you do: whether you see faith as a vice or a virtue.

Yet virtually everyone uses motivated reasoning to justify their beliefs based on emotion, or community standards, or simply what they were taught as a young child.