About our national decline; how vaccine mandates are mostly working; violence in support of Trump; skewed news coverage; and public resistance to a health mandate in 1847, about doctors’ washing hands. 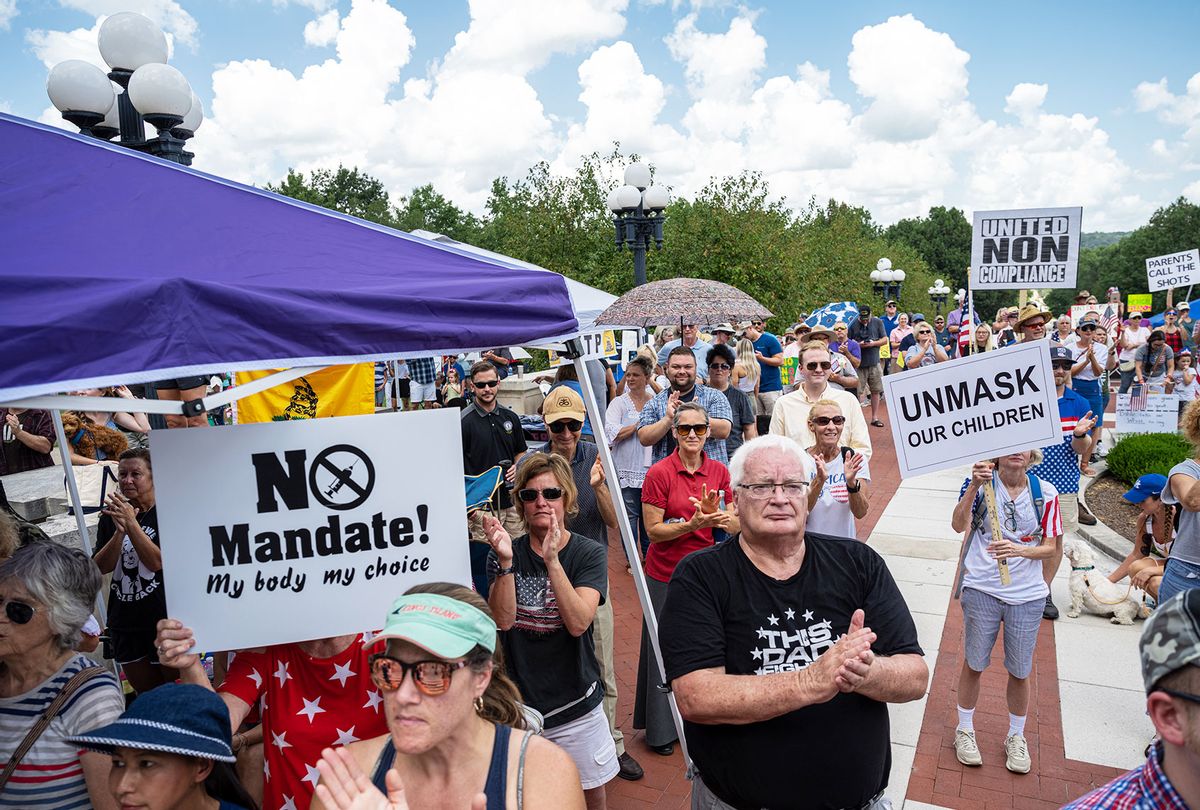 David Brooks, This Is Why We Need to Spend $4 Trillion (posted yesterday; published today)

Have we given up on the idea that policy can change history? Have we lost faith in our ability to reverse, or even be alarmed by, national decline? More and more I hear people accepting the idea that America is not as energetic and youthful as it used to be.

I can practically hear the spirits of our ancestors crying out — the ones who had a core faith that this would forever be the greatest nation on the planet, the New Jerusalem, the last best hope of earth.

Read again Robert Kagan’s foreboding Washington Post essay on how close we are to a democratic disaster. He’s talking about a group of people so enraged by a lack of respect that they are willing to risk death by Covid if they get to stick a middle finger in the air against those who they think look down on them. They are willing to torch our institutions because they are so resentful against the people who run them.
The Democratic spending bills are economic packages that serve moral and cultural purposes. They should be measured by their cultural impact, not merely by some wonky analysis. In real, tangible ways, they would redistribute dignity back downward. They would support hundreds of thousands of jobs for home health care workers, child care workers, construction workers, metal workers, supply chain workers. They would ease the indignity millions of parents face having to raise their children in poverty.

And Paul Krugman: Of Vaccine Mandates and Facing Reality

The vaccine mandates are working. (Note item below about how the news media’s disproportionate emphasis on mandate protests skews reality.)

To understand why vaccine mandates seem to work so well, we need to think about the real nature of vaccine resistance. Most of the people refusing to take their shots don’t really believe that the vaccines contain tracking microchips or that they have severe side effects.
Instead, everything we’ve seen suggests that many vaccine resisters are like the people who in the past raged about seatbelt laws and bans on phosphates in detergents, or more recently refused to wear masks. That is, they’re people who balk at being asked to accept what they imagine to be a cost or inconvenience on behalf of the public good. (In reality, getting vaccinated is very much something you should do on purely selfish grounds, but as I’ll explain in a minute, that information may not be getting through.) And as I’ve noticed in the past, political rage about public health rules seems, if anything, to be inversely related to how onerous these rules really are.

Media Matters: Headlines prioritize fear over hope in stories about vaccine mandates, subtitled, “Multiple mainstream outlets highlighted the small number of firings rather than the massive rates of compliance”

Comment: This is a problem with watching (or reading) too much news: you get the impression that relatively rare events are actually quite common.

Media Matters: Fox’s antivax programming is a moral abomination, but at least it’s “great for ratings”

Vox (via via): Why people who don’t trust vaccines are embracing unproven drugs, subtitled, “Inside the upside-down world where Covid-19 vaccines are dangerous and ivermectin is saving lives.”

Comment: It’s not about evidence. It’s about tribalism. Quote:

In communities of hardened vaccine skeptics, new information isn’t necessarily treated as an opportunity to reassess their beliefs. Instead, new facts are seen either as affirmation of what this community already believes or as a distraction that should be dismissed because it doesn’t neatly sort into their anti-vaccine narrative.

Salon: Today’s anti-mask activists have much in common with anti-handwashing doctors of the 1840s, subtitled, “Inside the 174-year-history of ‘motivated reasoning,’ the psychological cause of public health pseudoscience.”

About the resistance to washing hands, despite the evidence it reduced mortality. In 1847. Semmelweis. Fascinating to read the rationales for why washing hands couldn’t be a good thing. With discussion of “motivated reasoning,” and how it will always be with us.

The point here: partly, that some people will believe anything; partly, to expose the site “Real Raw News” (no link) as publishing many outlandish claims like this, and escaping legal consequences by stating, in tiny print on their “About Us” page (which most readers will never look at), that the site “contains humor, parody, and satire.” And partly to wonder: what are their motives? To see how many gullible people believe their outlandish lies and spread them across social media? (Harlan Ellison’s “Harlequin”!)

NYT letters: Should the U.S. Expand the Social Safety Net?

Comment: Responding to a conservative columnist’s claim that the G.D.P. has the highest priority, in the US, never mind the ranking of the US in terms of childhood poverty, economic inequality, etc. etc., compared to many other nations. It’s the Republicans’ “business success over everything” policy; and this of course is why big business supports Republicans, who can be counted on to legislate tax cuts for big business.

I have a backlog of links from early August and before, which I will catch up on in the next few days…

This entry was posted in Links, Links & Comments. Bookmark the permalink.