Robert Sheckley was a science fiction writer who debuted in the early 1950s, right about the time Philip K. Dick that did. They were both prolific short story writers through the ’50s, each publishing several stories a year, in the various magazines of the time, year after year. 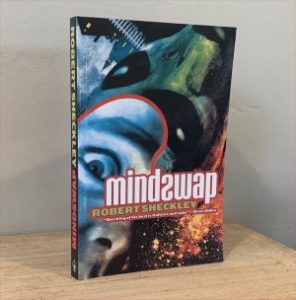 Sheckley was not as prolific a novelist as PKD, though; the one here was just his fourth published novel, in 1966, by which time PKD had published 20. Sheckley kept producing, steadily, for decades, but never reached the stature of PKD, nor did his later works impress as well-known as his early ones.

Sheckley was a humorist and absurdist with sometimes perverse takes on standard science fiction themes. Mindswap has quite a few cute ideas, and some subversive ones, but is structurally haphazard, as if the author made it up as he went along, aiming for a conclusion he already had in mind but otherwise marking time until he got there.

Lots of cute stuff. To be fair, Sheckley invokes the ideas of “metaphoric deformation,” the risks of perception (Panzaism), and the “Twisted World” early on, before invoking them in later scenes. And the final scenes are a classic science fiction twist, in which a traveler in time (or Twisted Space) returns home and finds it utterly changed–whether or not the traveler realizes it.

If only the narrative were less episodic and made more, you know, narrative sense.