Another afternoon of sorting and photographing photos and artifacts. For today, here’s a group shot of badges I’ve collected from the World Science Fiction Conventions (Worldcons for short) over the years. 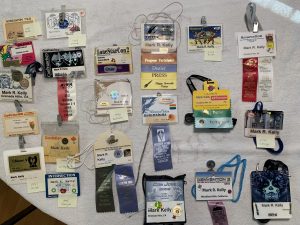 The Worldcon is the largest science fiction convention of the year, and is the longest running. The first thing to say about the photo is that it is not complete; somehow I don’t have a badge from every Worldcon I’ve attended. (Including one of my earliest, in 1984.)

Key fact about the Worldcons: they’re in a different city every year. Despite the name, usually in North America; once in a while in Europe; occasionally in Australia or Asia. Will say more about sightseeing opportunities while attending these conventions later.

Two things in general about these badges. As with the professional conference badges, they do not always indicate the place or even year. I had to look some of them up. Also, the (volunteer) runners of each convention invent cute nicknames, e.g. “Chicon” for a Chicago convention, “LoneStarCon” for one in Texas.

Also, when attending these conventions (SF conventions in general, not just Worldcons) you have a chance to collect various ribbons to attach to the bottom of your badge, indicating any kind of status. E.g., program participant, dealer, past Hugo-winner, and so on. Dedicated volunteers would sometimes strut around with a couple dozen of these, especially when they became horizontal (see upper middle) rather than vertical. Every community creates hierarchy and signs of status within it; it’s a human nature thing.

The one in the upper left is a bit of a mystery; it’s clearly from the convention held in 1980 in Boston. And though faded, my name and home city (Northridge CA) are printed on the insert. But in 1980 I was a grad student with no job and no reasonable way to attend a convention at the other end of the country. I think what I must have done was the join the convention as a ‘supporting member,’ for a lower membership price, which gave me the opportunity to vote in the Hugo Awards, and get the program book (and badge) in the mail, but not actually attend.

The first I remember attending was in 1984, by which time I had a job, and since it was close to me, in Anaheim south of LA and where I lived.

I attended virtually every year, in whatever city, from New Orleans in 1988 (just after I’d starting writing for Locus) until Anaheim in 2006. Then I skipped several long trips (to Japan, Montreal, Melbourne), attending Denver in 2008, Reno in 2011, and Chicago in 2012. Then I ‘retired’ from my job and cut back on such expenses. In the past decade I’ve attended only the convention in San Jose, because it was close to me, in 2018.

That badge is in lower right. One more note for now. Whenever you’re nominated for a Hugo Award — the well-known award voted on by the memberships of these conventions — you get a tiny little pin in the shape of a (Hugo award) rocket ship, to pin to your badge. If you win, you get the award of course, but you still have the pins to save and re-pin to following years’ badges. And so my 2018 badge has my two Hugo pins (for nominations in 2002 and 2005). If I ever attend another Worldcon, I’ll take them off this badge and have them ready for my new one.

More about these conventions, what I remember from them, and what I did along the way, in another post. And there are three or maybe four other forthcoming posts showing badges from *other* SF conventions and conferences.