I’m going through — one more time! — artifacts of my family’s life, and my own life, that have been gathering dust in a couple closets, determined once and for all to take photographs and write up descriptions of them, for posterity.

Let’s begin with a set of work badges. (Click to embiggen.) 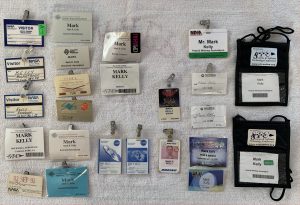 For decades it’s been true that companies with any kind of security needs issue badges to employees. Aerospace companies, hospitals, airlines. They serve to identify you as an employee when you enter the building in the morning (to the guard sitting at the reception desk), and they’re handy to identify fellow employees. (The same is true of members of conventions or conferences — great when you meet someone familiar but whose name doesn’t come to mind.) And of course if you objected to such branding in the name of freedom, then you simply didn’t work at those companies.

Here’s a group of badges from my work as an aerospace employee from 1982 to 2012. I suspect there are more than these, another batch in the downstairs closet perhaps, so more may be coming.

There’s only one employee badge here, the one at lower middle-right that says Boeing in two places. Usually when new personnel badges are issued, as when the company name changes, you turn in your old one to get the new one. I don’t know why I managed to keep this old Boeing badge.

Very roughly, my company, Rocketdyne, was owned by Rockwell International from the 1980s to the early ’90, then by Boeing from the ’90s to the early 2000s, and then by Pratt & Whitney (parent company: UTC) from the ’00s until 2012 or so, when it was sold to Aerojet, just after I left the company. So the Boeing badge is from the middle of those three decades.

The rest of these are all badges for conferences or visits to other company facilities. The three in upper left are visits to NASA sites, including Marshall in Huntsville, AL, and Stennis in southern Mississippi.

Several, including the two big ones at right, are to an annual event called the Systems & Software Technology Conference. (Curious how most of these badges don’t have dates on them.) NDIA was a similar conference. PWRTec was a meeting between Pratt & Whitney sites only; I seem to recall locations in Cerritos and Downey. A couple are to a Software Technology Conference, which is more specific than the SSTC.

Two or three times I attended one or another of these conferences in Salt Lake City, staying downtown at the Marriott, right across from the convention center and a couple blocks south of the big Mormon Temple. That was probably the most glamorous destination for any of my work trips. By count most were probably to Huntsville, AL, in the ’80s while supporting space shuttle, and in the ’90s as the entire company implemented software process improvement. It’s not glamorous, except for the Space Museum.

Another three or four times I went to Pittsburgh, PA, to attend classes at the Software Engineering Institute (author of the process improvement model and standards), which is in a pleasant area of the city right near Carnegie Mellon University. I think there are four in this photo. Later I attended SEI classes at hotels in Arlington, VA, and Alexandria VA, interesting places indeed, but work travel generally does not allow time to go sightseeing.
I also recall a conference in Denver, but in a suburb south of the city, far from downtown, again with no time to sight-see. And a couple of times I drove (from LA) to conferences in San Jose (at the prestigious, now-closed, Fairmont Hotel, right downtown); the second, in March 2000, was memorable because my car, a then 7-year-old Honda Prelude, broke down in the middle of the street and had to be serviced at the dealer over the weekend…

By the far the best place I ever went on a work trip was to Maui. It was to another then-Boeing site, so didn’t need a visitor’s badge. This was in November, 1999, about the time I was transitioning from my SLR camera to a digital camera, which is probably why I have no photos from this trip; presumably I took digital pics that somehow got lost on the harddrives of long-since replaced PCs and laptops. Anyway, the trip was to support a Boeing-operated site at the top of Haleakala, where there is a complex of telescope facilities. I was there with my coworker Alan P and since we didn’t have security clearances they couldn’t show us much, but we did drive up there one evening after dinner and got the limited tour. The most they divulged was that the telescope being supported was one that could track and identify enemy satellites across the sky–during the daytime.