Water through the body; human inability to account for long-term threats; how sometimes the answers to conspiracy theories are simple. 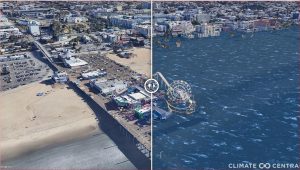 First, a thought for the day — via a Facebook meme linked by C.J. Cherryh and attributed to The CryptoNaturalist:

The water in your body is just visiting. It was a thunderstorm a week ago. It will be the ocean soon enough. Most of your cells come and go like morning dew. We are more weather pattern than stone monument. Sunlight on mist. Summer lightning. Your choices outweigh your substance.

I said something similar a year or so ago in this post. And six years before that, here: Rainbows and the Afterlife, trying to compare atoms in the body with words in the Bible.

And Scientific American published this piece back in April: Our Bodies Replace Billions of Cells Every Day, subtitled, “Blood and the gut dominate cell turnover.”

Salon, 16 Oct 21: We now know how badly our cities will be flooded due to climate change, subtitled, “Even if carbon emissions are curbed today, hundreds of millions will be displaced as vulnerable cities see flooding”

CNN, 12 Oct 21: Our underwater future: What sea level rise will look like around the globe.

CNN has some cool before-and-after graphics of famous spots around the world, comparing what they look like now and what they would look like “if the planet warms to 3 degrees Celsius above pre-industrial levels.”

The only one of these places I’ve been to is the Santa Monica pier. The projects shows the pier under water, and the city flooded several blocks inland. Oh–and I’ve been to Buckingham Palace.

Again, the point here isn’t about climate change exactly. It’s about how scientists (and those who follow them, like me), have been aware of the dangers of climate change for decades. At least 40 years — to cite a single example, Carl Sagan’s COSMOS, published 1980, warned about it. The Big Picture question is: why do humans have such difficulty reacting to and mitigating against long-term threats? Currently we have a (Democratic!) senator from West Virginia who would sabotage a key part of a new climate change policy in order to protect the (already dwindling) coal mining jobs in his state — despite the increasing danger of flood in his state, due to climate change! Is this the ultimate in selfishness? Or shortsightedness?

On that subject, some links:

NYT, 18 Oct 21, Letters: ‘History Will Not Be Kind to Senator Joe Manchin’

History will not be kind to Senator Joe Manchin, who has arrogated to himself the right to deep-six the clean electricity program in President Biden’s budget bill. Apparently Mr. Manchin and all 50 Senate Republicans need to see the nation and their own constituents engulfed in even more drought, wildfires, hurricanes and floods before they wake up to the devastation occurring all around them from the burning of fossil fuels.

Mr. Manchin, of course, represents West Virginia, where coal is king. So he has chosen to trade any hope of a stable future environment for mankind in return for a few more years of coal jobs and cushy surroundings in the Senate. His is the face of utter folly.

As I’ve said before, sometimes you have to let the bull into the china shop before some people will believe there is a bull. On such matters scientists face a kind of quandary: If you warn people sufficiently to avoid a potential catastrophe, some people will say the scientists were overreacting, and no catastrophe would have occurred anyway. If you warn people, and the people ignore you, and the catastrophe happens anyway (as the effects of climate change will be doing over the next century) many people will accuse the scientists for not warning them sufficiently. It’s a no-win situation.

NYT, 15 Oct 21: Key to Biden’s Climate Agenda Likely to Be Cut Because of Manchin Opposition, subtitled, “The West Virginia Democrat told the White House he is firmly against a clean electricity program that is the muscle behind the president’s plan to battle climate change.”

Vox, 16 Oct 21: The myth of the climate moderate, subtitled, “’There isn’t a middle ground between a livable and unlivable world.’”

Sometimes the alternative answer to conspiracy theories is a simple one right in front of your face.

Finally, this, a sequel to previous post. I realize groups who think things like this are fringe groups, and not mainstream. Still, this is what their holy books inspire, by those who *do* read them closely, perhaps too closely.

Alternet, 19 Oct 21: Far-right website claims that Christians should see dying from COVID as ‘a good thing’.

I won’t quote from this. Death cult? Read it yourself.

This entry was posted in Philosophy, Politics, Science. Bookmark the permalink.