Starman Jones is the 7th of 14 novels that Heinlein published from 1947 to 1963, at annual intervals except for a four-year gap between the last two, that were called “juveniles” at the time — that is, designed for younger readers — what are now called YA, for Young Adult, novels. (It’s worth noting that the 13th of these, Starship Troopers, is usually *not* considered YA, in the way all the others are, but that’s a topic for another time.) 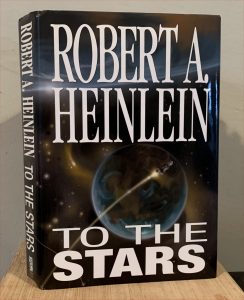 I read most of these books in the early ’70s, before my 20th birthday, but I came to Heinlein later than I bonded with Asimov, Clarke, and for that matter, Bradbury. Over the decades my regards have shifted, though I still find myself rereading Heinlein after I’ve already, in the past five years, reread most of AB&C.

Starman Jones was one of my favorites, and this is the fourth time I’ve read it over 50 years. I suppose its appeal is the common adolescent fantasy of running away from home (especially from cruel parents), and achieving great success. Of course, the adult reader is more skeptical of such a plot than the teenaged one.

The edition I’m reading now is part of a Science Fiction Book Club omnibus, shown above, published in 2004.

In a future when starflight is common, as are high speed trains that run on suspended “ring roads,” teenager Max works on a farm run by his stepmother. When stepmother remarries — to a man who dares to sell Max’s books, left to Max by his uncle — Max rebels and runs away.

Through a series of fortuitous meetings, some with grifters, he finds a job on a starship, first as a low-level “spaceman,” tending passengers’ pets; then as a “chartsman,” when his eidetic memory, and knowledge of astrogation manuals, is discovered; and eventually, after a series of accidents and tragedies, is obliged to take over captaincy of the ship itself.