Today’s L&Qs&Cs, about where the 21st century is heading after the optimism of the 1990s, with a recollection about being in Berlin in 1993. Today’s endpiece, about Wordle. 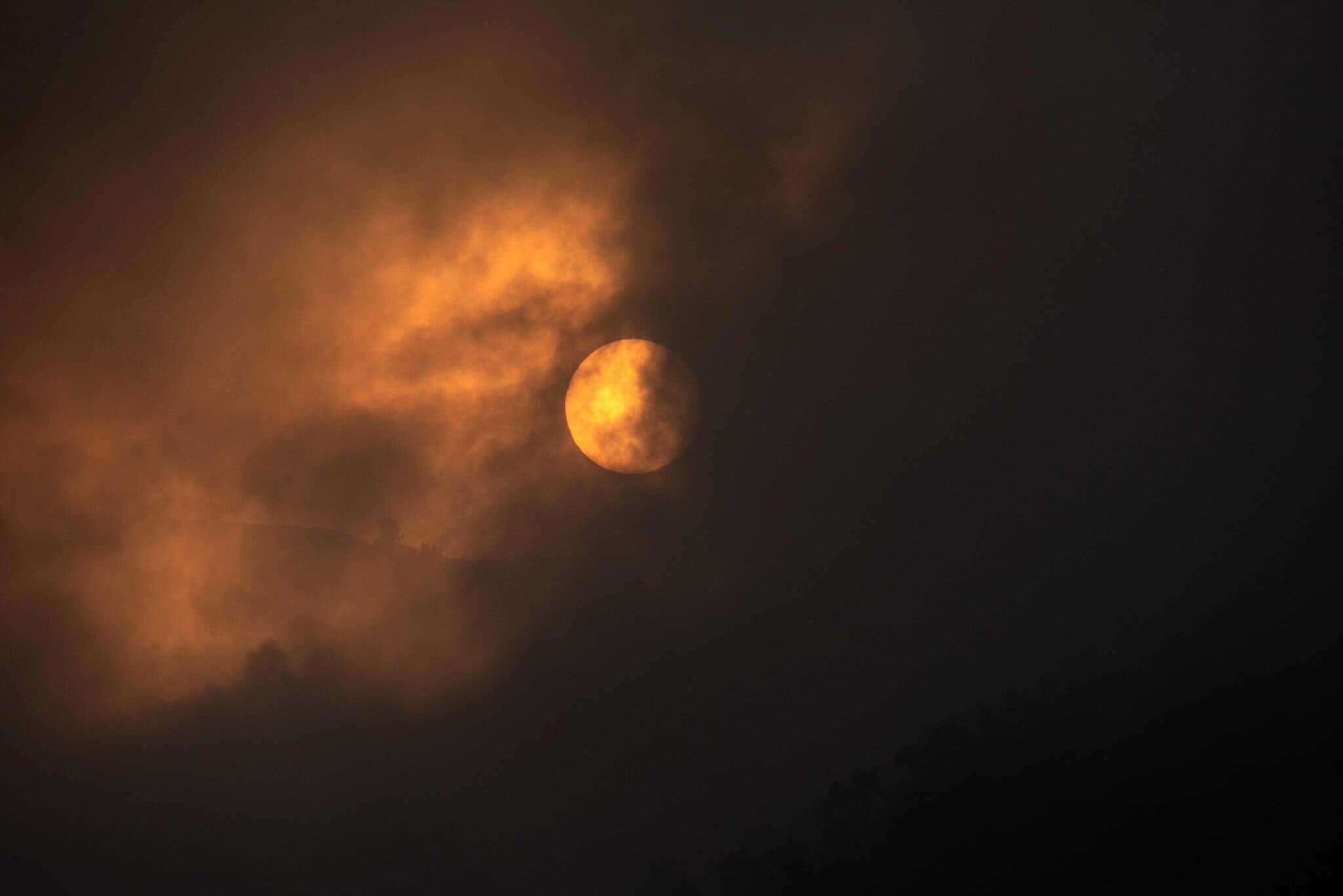 Long piece by David Brooks in NYT today, taking on the big question of what has happened in the past couple of decades. The 1990s were optimistic: the Berlin Wall had fallen; the Soviet Union dissolved; Francis Fukuyama thought that liberal democracy had won out and the world would become peaceful and democratic and it was thus the end of history.

(
As it happens, I was in Berlin in 1993, not long after the Berlin Wall fell. My friends and I walked from the west to the east of Berlin with no problem. We went up the Fernsehturm tower. And we walked downtown commercial streets of mostly closed storefronts — except for the occasional brand new Mercedes dealership. Capitalism was quickly creeping in.

And the song I remember from that era (even though it had come out 3 years before), was a song called “Right Here, Right Now,” by a now-forgotten group called Jesus Jones. The video.

Then 9/11 happened. Fundamentalist religion gained ground, even here in the US. Authoritarian regimes reappeared or strengthened. The US even elected a would-be authoritarian, who pooh-poohed democratic institutions and norms and openly admired authoritarian leaders around the world. And his acolytes don’t seem to be going away.

I obsess about those years now. I obsess about them because the good times did not last. History is reverting toward barbarism. We have an authoritarian strongman in Russia threatening to invade his neighbor, an increasingly authoritarian China waging genocide on its people and threatening Taiwan, cyberattacks undermining the world order, democracy in retreat worldwide, thuggish populists across the West undermining nations from within.

What the hell happened? Why were the hopes of the 1990s not realized? What is the key factor that has made the 21st century so dark, regressive and dangerous?

He goes on about what liberalism means — “a way of life built on respect for the dignity of each individual. … There’s no one best way to live, so liberals celebrate freedom, personal growth and diversity.” — and how the founders understood that nevertheless individuals can be frail. “Our founders were aware that majorities are easily led by ambitious demagogues.” And designed a Constitution to guard against such tendencies. They understood that “peace is not natural — it has to be tended and cultivated from the frailties of human passion and greed.”

Yet… here is the core of his argument, I think… “Democracy and world peace were taken for granted.” And so institutions were neglected or have fallen out of fashion. The world returns to “normal”– big countries run by fierce leaders; people come to despite outsiders, like immigrants; global affairs become like the law of the jungle. “This is the way it’s been for most of human history.”

Will the liberals of the world be able to hold off the wolves? Strengthen democracy and preserve the rules-based world order? The events of the past few weeks have been fortifying. Joe Biden and the other world leaders have done an impressive job of rallying their collective resolve and pushing to keep Putin within his borders. But the problems of democracy and the liberal order can’t be solved from the top down. Today, across left and right, millions of Americans see U.S. efforts abroad as little more than imperialism, “endless wars” and domination. They don’t believe in the postwar project and refuse to provide popular support for it.

And so we have to relearn the wisdom of the founders. The essay ends,

We are not as virtuous as we think we are. Americans are no better than anyone else. Democracy is not natural; it is an artificial accomplishment that takes enormous work.

Then we need to fortify the institutions that are supposed to teach the democratic skills: how to weigh evidence and commit to truth; how to correct for your own partisan blinders and learn to doubt your own opinions; how to respect people you disagree with; how to avoid catastrophism, conspiracy and apocalyptic thinking; how to avoid supporting demagogues; how to craft complex compromises.

Democracy is hard; fascism is easy. (See Timothy Snyder book, just summarized.) Similarly, as I’ve commented, science is hard, religion is easy. (And science fiction is hard, fantasy is easy. Thus, much of fantasy is set in past feudalistic worlds, where everyone knows their place. Even as many heroes/heroines in fantasy are young people who seek to overturn their society’s order — at least to reclaim the throne that is rightfully theirs.)

True education is hard; shielding young people from education so that cultural and religious traditions won’t be challenged is relatively easy, at least for parents raising children they want properly indoctrinated.

Wordle of course is the online word game that’s taken the world (or at least the US) by storm in recent months. I’ve been playing it since January 20th, not quite a month ago. I’ve never lost. (Though apparently from my log, I missed a day.) I won’t try to explain it, since many of my Facebook friends know about and routinely post their results, and I’m assuming any readers of this blog know about it too. I’ve posted my results on Fb only a couple times, in response to others’ posts.

The error many people make is, when they have three or four letters confirmed, to keeping guessing words with those three or four letters in place and some finishing letters taking up the final spots. For example, yesterday’s puzzle, after guessing two or three starter words (more below), was sha*e. And as many noted, there are at least 7 letters that could fill the fourth spot. Many players try them one by one, guessing, e.g., shame, shake, shade, shave, and so on. But with 7 possibilities, you quickly run out of tries and can lose. (You only have 6 tries to guess the 5-letter word.)

No. The way to do it is like the way to start the puzzle, with starter words. I have three, chosen to use as many of the most commonly used letters in the English language as possible, with almost no overlap. Doing this, I almost always identify three or four letters in the solution, even if they’re not in the correct positions. Then, I look at the letters not chosen (in the typewriter grid at the bottom), with the letters I have, and use a notepad doc to mix them around and find a plausible solution. If there are several, as in sha*e, I take all the possible final letters and find words that contain only them. E.g., my next guess after sha*e was pukes, because that used two of the four letter that could fill the blank. (I should have used puked, which uses three.)

Another common error is to not consider repeated letters. Here’s today’s puzzle, which I solved using the process described above. This reveals three of my starter words, though I have some alternates. 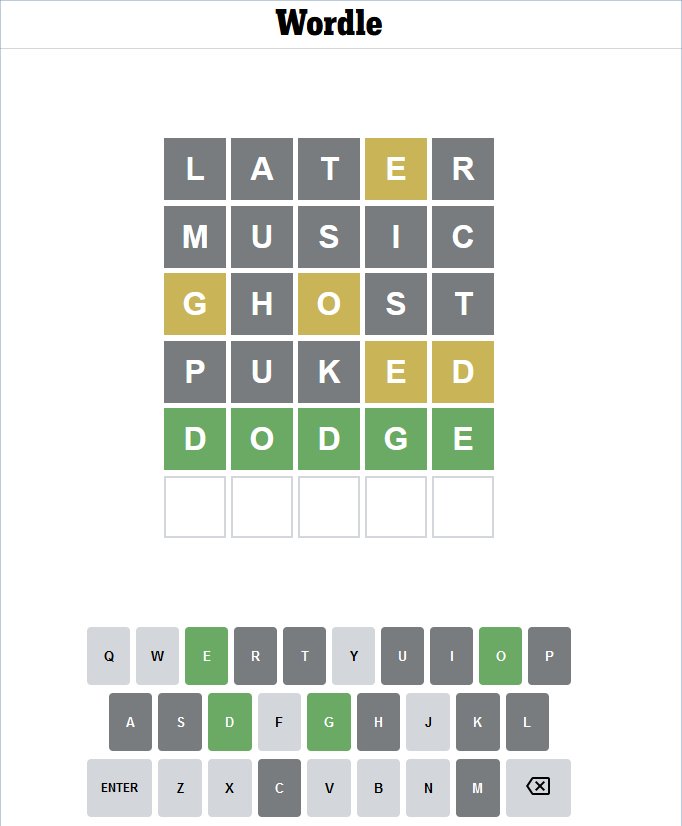